MAP31: Monster Mansion is the thirty-first level of Eternal Doom. It was designed by Jim Flynn and uses the music track "UAC 5-0". It is the sixteenth level in overall megawad progression, because MAP15 can be exited only via the secret exit. Likewise, you must exit this level to Map32.

Like Map15, this level was part of the Eternal Doom III upgrade, but twelve levels (Map32 and Map16-Map26) from the Eternal II section still remain. 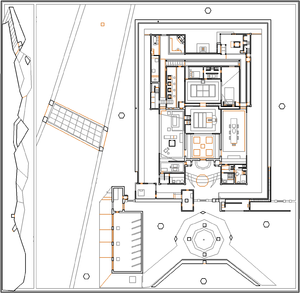 Map of Monster Mansion
Letters in italics refer to marked spots on the map. Sector numbers in boldface are secrets which count toward the end-of-level tally.

* The vertex count without the effect of node building is 3766.