MAP31: Mortar Combat is the secret level of Community Chest 4. It was designed by Stuart Rynn (Forty-Two), and uses the music track "Mortar Combat," which he composed specifically for the map.

This level contains a secret exit leading to MAP32: Mutare. Completing this level through the normal exit takes the player to MAP16: The Forgotten Base. 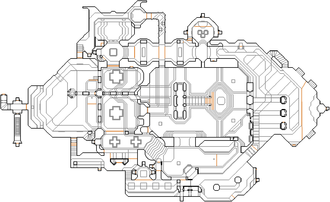 Map of Mortar Combat
Letters in italics refer to marked spots on the map. Sector, thing, and linedef numbers in boldface are secrets which count toward the end-of-level tally.

With a combination of nasty enemy placement, a compact and packed level, and a climax reminiscent of the ending of the infamous MAP31: Cyberden (but tougher), you will need to watch all your angles and be on top of your game to survive.

Only one key is required to exit - the blue skull key. Getting there, however, is the real challenge.

You begin in a corner of an irregularly shaped room. Pick up the shotgun, chaingun, and multiple boxes of shotgun shells and boxes of ammo - you'll need it. Head out into the first open area. Here, you will face a pack of up to six demons. The real problem, though, is in the south - from the pillbox-like slits and windows, a large amount of imps, Hell knights, revenants and even an arch-vile (not on Hey, not too rough and below) will start taking pot-shots at you. Remember to grab the super shotgun at the east side when it appears (using a fake floor mechanism). As you head further west, watch out for up to nine imps on a ledge in the north.

Continue west, watching for up to four shotgun guys in ambush near the steps. Head down the steps into a hall with two plus-shaped lights. There is a revenant dead ahead and up to five imps on a ledge to the left. Take them out and continue past the low ceiling into a wider hall. There are up to three mancubi on the ledge to the east, combined with two windows from which Hell knights can lob plasma at you. The bigger problem is the arch-vile in the pillbox in the northwest. Obviously, the super shotgun will not cut it here. Make a daring detour for the rocket launcher and boxes of rockets located on the outdoor platform to the west. Grabbing the rocket launcher involves getting into a massive crossfire between imps on a distant ledge, up to four cacodemons, an arachnotron through a window and another arch-vile in an overlook. Obviously, the arch-vile is the main problem here - if you need cover, jump into the (non-damaging) blood and use the staircase in the southeast to hop back onto the rocket launcher platform.

Now that you have the rocket launcher, head back to the hall with the mancubi. Lay waste to the arch-vile in the pillbox first, then the mancubi, then any Hell knights you spot. Once they are dead, continue north to a smaller hall with a large door at its end. Get rid of the six imps ahead, as well as the two mancubi, two Hell knights and two lost souls (not on Hey, not too rough and below) on the ledge in the east. If you did not manage to kill the arachnotron that was guarding the rocket launcher, you need to clear it out through the window to the west, as it can fire on you through there.

Go through the large door to a chamber with four rockets on the floor. Watch for up to two imps dead ahead, as well as a revenant in an alcove to the left (west). Continue east, and structures in the next two oval chambers will lower, revealing up to six Hell knights that your rocket launcher will need to punch through. While in these chambers, watch for four pairs of zombiemen on ledges in the first one and four pairs of shotgun guys on ledges in the second one.

Head into the blood, but before you proceed further, make a detour for the plasma gun and bulk cells in the octagonal chamber in the north. When you pick up the weapon, walls open, revealing up to six revenants which you can burst down with the rocket launcher.

Continue east into another outdoor area. As you head out, you will be attacked by another big pack of demons. Up to four Hell knights and three barons of Hell will also begin attacking from a ledge in the east. Your first concern, however, should be the high ledge with up to five revenants to the left of the entrance to this outdoor area. They can attack you from wherever you are in this area, so they are a priority!

Once the coast is clear, head up the staircase near one end of the raised pathway in the blood. This takes you to the ledge where the Hell nobles were. As you continue forward, a wall will lower revealing a mancubus - see if you can get it to cause some monster infighting. While you are doing this, you need to be careful of up to four chaingunners in alcoves to the west, as well as the three pillars with arch-viles inside. You may wish to deal with the latter up-close and personal to isolate each of them.

When the enemies are cleared out, head back up to the Hell nobles' ledge and go all the way to the end. Flip the switch in the south.

Follow the path in the blood south and head up the steps. This takes you to the raised section south of the first outdoor area, where Hell knights, imps and revenants were taking potshots at you. Clear out any stragglers, then find the steps in the southwest. This will allow you to climb up onto the ledge where the Hell knights were. As you continue along the ledge, a wall lowers, revealing a baron of Hell. Flip the switch at the end to open the door in the west of this area.

This leads to a hall with square skylights. Clear out imps on the ledges to the south, as well as up to five incoming revenants dead ahead. While you are doing that, watch for up to two revenants and an arachnotron in hallways to the north. Head down the steps and immediately turn left to see a window with a Hell knight in it. This is actually a row of Hell knights in a thin alcove, so just dump rockets into it until you don't see any more flying plasma headed your way. Run west past this thin alcove and head up the steps. You are now on the ledge where the imps were attacking you when you picked up the rocket launcher. Walls have opened, revealing the blue door, up to six revenants, and up to two arch-viles (not on Hey, not too rough and below) at the far end of the ledge. You don't have the blue key yet, so clear the monsters out while heading clockwise around the ledge.

At the end of the ledge, head into the doorway. You need to clear out an arch-vile on a ledge and two Hell knights (three on Ultra-Violence and above). While you are at this, take the chance to punch through the imps on the ledge at the far corner. As the corridor walls transition into a long window overlooking a blood pool, you will have to deal with up to two cacodemons and three mancubi. Carefully placed rockets should solve the problem. Further forward is a small octagonal chamber with one more mancubus to deal with, but do look out for imps on the ledge to the left (north).

Continue around the corner, and two revenants will suddenly appear. Deal with them and continue forward. You will walk across a raised bridge that has appeared in the previous part of the level, allowing you to reach a previously inaccessible door. This takes you a walkway in a large blood pool with a checkered structure in the middle. Shoot out up to six revenants behind the windows in this structure first. To unlock access to the structure, follow the walkway around and first open the door at its western end. This takes you to the ledges where the first mancubi were at the starting section of the map. Head north, drop down and flip the switch at the end to open the bars blocking access to the checkered structure.

Return to the blood pool with the checkered structure, and enter it through the north or south side. Head up the steps to where a soulsphere is, and prepare for the level's climax. As you approach, the pillar behind the soulsphere lowers, revealing a cyberdemon and the blue key. Walls will also open in this part of the structure. At the same time, up to 51 revenants will teleport into various parts of the level. Dodge around the cyberdemon, grab the blue key and jump out, mowing down all opposition in your way.

Head through the door in the west of the previously-mentioned walkway, and head back to the ledge where you picked up the rocket launcher. Use the staircase to the south to climb up to the ledge with the blue door (watch for more revenants - some of them teleport here). Open the blue door and kill the final arch-vile ahead. head tot eh end of the level and flip the switch to exit the level.

To reach the secret exit, you need to press several skull switches. Some of these switches reveal items or arch-viles inside of them, but they also remove the barriers to the secret exit. There are 13 switches in total, and whether a switch contains an arch-vile depends on the skill level. On Ultra-Violence co-op, all switches except the first one will contain an arch-vile.

Switches that always contain no arch-vile on single-player are marked with an asterisk:

* The vertex count without the effect of node building is 3055.