MAP31: Mt. Chaos is the secret map of Community Chest. It was designed by Simon Broadhead (VolteFace), and appears to be inspired by Doom E3M6: Mt. Erebus.

This level contains a secret exit leading to MAP32: The Citadel. Completing this level through the normal exit takes the player to MAP16: Methods of Fear. 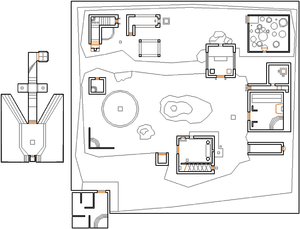 Map of Mt. Chaos
Letters in italics refer to marked spots on the map. Sector numbers in boldface are secrets which count toward the end-of-level tally.

You start in a pit; press on the northern wall to raise it. Grab the megasphere / blue armor -- you won't be able to get back here. Open the door, go through the hallway, and into the teleporter. Open the northeast door, and enter the southern, wooden building. Shoot the satyr's face, and press the switch in the northwest to create a step to the south. Go up the step, along the walkway, and out of the northern opening. Go around to the eastern side of the building, and flip the switch to lower the barrier blocking the door to your south. Open the door, grab the red key, and enter the northern building through the red door. Walk up the rocky staircase, and run to the L-shaped building to the northwest. Open the door at its southern side, and press the switch inside. Go to the stone building in the east, and navigate the stone pillars up to the blue key. Head back out, run to the far northwest of the map, and open the blue door. Go up the stairs, and run up to the yellow key, which will warp to the ground east of you. Grab it, drop back to the lower ground, and wait for the barrier in front of the yellow door to lower, which takes roughly two minutes. Once it finishes, open the door, and step into the teleporter.

The small building to the northwest of the circular "fountain" contains a chaingun and various ammo.

The small building to the southeast of the circular "fountain" contains health and (on medium difficulty) a box of shells.

The small building to the east of the building with the red key contains lots of cacodemons.

It is impossible to reach the secret exit in no monsters mode, as it requires the presence of a Commander Keen for it to be accessed.

* The vertex count without the effect of node building is 1386.