MAP31: Night of Fail is the first secret map of Doom 2 Unleashed. It was designed by Walter Confalonieri (daimon) and uses a custom music track. When using the music WAD included with this megawad, this level instead uses the music track "Fifutifaibu" by Paul Corfiatis which is a remix of "Night of Fire" by Niko (Maurizio De Jorio).

This level includes a secret exit to MAP32: Morgue Theft. 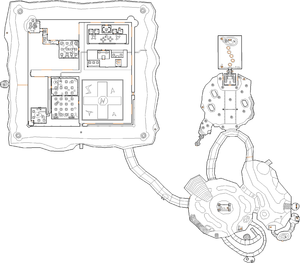 Map of Night of Fail
Letters in italics refer to marked spots on the map. Sector, thing, and linedef numbers in boldface are secrets which count toward the end-of-level tally.

You start on a white ledge, facing a brick structure. Head south-east into a dark tunnel and follow it until you get outside again, then turn left and step on the red and white teleporter pad in front of you. Head south into another tunnel leading to a cavern with zombiemen - there is also a computer skull switch on the south wall which you will need to return to later. Head north-east past an imp to another teleporter and step into it to reach the brick structure you saw at the start, then follow the wall round past some Wolfenstein SS until you reach a skull switch. Press the switch to be teleported to a small cavern containing the yellow skull key.

Step out of the cavern, turn right and follow the river until you go over a waterfall then head north-west to find a set of steps leading up to the start point. Retrace your steps to the computer skull switch, where a shotgun has appeared along with some zombiemen and SS, and throw it then return to the start point and head north to an open tunnel. The tunnel will bring you to a large castle surrounded by a deep moat - head west and north along the narrow path until you reach a teleporter which will send you across the moat, then head east and north around the castle walls until you find a door on the left that will let you go inside.

Kill the cacodemons and pain elemental ahead then turn right at the door and head straight forward to a junction; head north at this point and follow the passage until you see a door on the left. Go through this door and kill the three SS waiting in the next room, take the plasma gun and energy cell packs sitting on the desk then go round the south-west column to find a small switch. Press the switch, then leave the room and go back to the junction you passed earlier - head west and go through the wide doorway on your right to enter an area with tables and chairs, as well as four prison cells along the north wall. Go into the second cell from the right (containing a shotgun guy), then turn right and step through a small tunnel into the adjacent cell. Use the teleporter in this cell to return to the start point.

Head due north past the brick structure and go into a dark tunnel, which you can follow round to another outdoor area. As you leave the tunnel you will see four approaching demons, plus a number of other monsters that teleport in - stay in the tunnel to clear any enemies at ground level, then step outside to kill any monsters waiting on the surrounding ledges. Once the way is clear, follow the dirt path south and east to a set of steps leading up to the blue skull key.

Backtrack to the castle and go to its center, then head north until you see a door on the left between blue skull markers. Go through the door and kill the SS and mancubus waiting in the next room, then go through another door in the north-west corner and follow the passage round the corner to find four chaingunners guarding a lift. Ride the lift up and kill four SS waiting around a table, press the blue switch on the south wall then backtrack to the middle of the castle - a door has opened in the wall north of the "SATAN" floor pattern to reveal a marble teleporter. Step into this teleporter to reach a narrow ledge outside the castle, which you can follow round to the red skull key.

After taking the red key, go back inside the castle and return to the wide doorways leading to the prison area. Opposite these doorways is a door flanked by red skull markers - go through this door and kill two waiting SS, press the gargoyle switch on the south wall then backtrack to the starting area and enter the tunnel leading to where you found the blue key. Halfway along the tunnel you will find that the north wall has opened to reveal a cave with a large blue bridge guarded by several SS and a baron of Hell - cross the bridge and open the door at the end, kill two revenants waiting behind it then climb the steps up to a doorway with wooden bars. Press the skull switch on your left to open the bars.

Ahead you will see several flesh platforms holding imps, which lead to a corpse portal guarded by a Hell knight. Kill all the monsters then run across the platforms and step into the portal to finish the level and move on to MAP16: The Spooked.

When you approach the barred doorway leading to the normal exit, you will see another set of bars on the right blocking a computer skull switch. After opening the doorway to the exit area, step through it and you will hear the second set of bars open behind you. Go through them and throw the switch, then head back across the blue bridge and turn right at the end, following the path west and south until you reach another computer skull switch guarded by a knight. Throw this switch then return to the brick structure you saw at the start of the level - the wooden door in the north wall has opened, letting you step into the teleporter behind you which will send you to MAP32: Morgue Theft.

A super shotgun can be found by the north wall of the castle.

An armor pickup can be found in the second prison cell from the west.

* The vertex count without the effect of node building is 8300.