MAP31: Optical Hopscotch is the secret level of the first episode of Back to Saturn X. It was designed by Paul DeBruyne (skillsaw), and uses the music track "Bitmap" by Sarah Mancuso. It is accessed from MAP15: Tricyclic Looper. The par time defined in MAPINFO is 4:45. In the official add-on version, this level's name is Defenestrator. 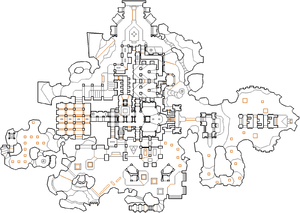 Map of Optical Hopscotch
Letters in italics refer to marked spots on the map. Sector, thing, and linedef numbers in boldface are secrets which count toward the end-of-level tally.

The keys in this level can be obtained in any order. All three keys are needed to reach the exit to MAP16: Get Out Of My Stations II; none of the keys need to be picked up to reach the secret exit to MAP32: The Hard Way, although reaching the red and yellow keys is required.

Take the armor, super shotgun and berserk pack in front of you then turn left and left again to find steps leading down to a door. Go through and follow the ledge to some health bonuses next to a rocket launcher and radiation shielding suits; take a suit then follow the health bonuses to a tall pillar that will lower as you approach, get on top of it and wait for it to rise again before running south-west across another moving pillar and over a wall to land in a nukage pool. As you walk forward some compartments will open and release shotgun guys, imps, arachnotrons and demons - enter the north-east compartment and press the arrow button here to lower a wall nearby and reveal three green platforms, then run across the platforms to land on a ledge below with some caged imps. The platforms will fall away as you step across them - if you miss your footing, go back up to the compartments and press three more buttons that have been revealed to raise the platforms again.

Follow a trail of health bonuses and rockets round to another pillar which lowers as you approach, ride it up to the top then run south-east across two more moving pillars to land on a ledge below with a shotgun. Kill one or two revenants that teleport in then run north to land on a blue teleporter, which will send you through a chain of teleporters to a U-shaped ledge high above. Follow this ledge round to find the blue keycard, but use caution as a wall on your right will lower to reveal an arch-vile and a baron of Hell; some walls just beyond the fences will also lower to reveal mancubi and chaingunners. To escape the trap, press the "LOCK" panel next to the arch-vile to lower a nearby wall then walk west to drop down to a ledge with a plasma gun.

From the start, head west up some steps and turn right to dispose of a waiting Hell knight, then follow the hallway until you reach a chaingun and clips. Head north down another hallway to a door, ready to kill any imps (or chaingunners and an arch-vile on Hurt Me Plenty (HMP) skill level or higher) that are released around you, then open the door to find a rocket launcher at a T-junction - from here you can turn left to go for the yellow key, or right to go for the red key. Head down the stairs past a mancubus to get to a lift and activate it, then ride the lift up to a seemingly empty junction - as you reach the junction, the surrounding walls will lower to reveal various monsters that will teleport all around the room, so avoid using the rocket launcher here. Press the "LOCK" panel on the west wall to open the door opposite it, then go through to a corridor where two crushers will activate; step past the crushers to reach a red button and press it to open the bars blocking the red keycard.

Follow the directions above for the red key until you get to the T-junction with the rocket launcher; this time, turn right to enter a low corridor and head round the next corner, which will lower the floor to reveal imps, one or more cacodemons and a pain elemental. Continue north to get back outside and dispose of some imps (plus shotgun guys and chaingunners on HMP or higher), then cross the bridges ahead to reach a switch on the north wall; flipping it will open compartments around you with various enemies, including one at the south end of the bridge containing an arch-vile. Enter the arch-vile's closet and flip the switch inside it to lower a lift to your left holding a plasma gun, then ride this lift up and follow the passage until you land in a blue-floored hall. Enter the south half and flip the switch inside the east column, which will release a number of revenants and one or two arch-viles, then go into the north half and enter the north-west compartment to find a "LOCK" panel. Press this panel to lower the bars blocking the yellow keycard, then head due south to collect it - the wall in front of you will lower, leading to the room with the exit doors.

With all three keys, return to the starting point and enter the neighboring room to the east, then open all three locked doors in the east wall to reveal another door - when you try to open this door, five closets containing various enemies (including two revenants behind you on HMP or higher) will open behind you. Press the red "LOCK" panel inside the center closet to open the door you just used, then go through and pull the switch to raise a bridge across the pit in front of you, which is guarded by arachnotrons. Cross the bridge and kill two revenants and an arch-vile waiting inside the next building, then run south to grab a supercharge and land on a teleporter below; you will pass through a chain of teleporters, telefragging revenants on the way, before landing on an enclosed ledge. Pressing the "LOCK" panel on your right will lower a barrier in front of the escape teleporter, but while it lowers you will have to dodge incoming rockets from a cyberdemon until you can use the teleporter to telefrag it. After repeating this process three times you will reach a safe ledge with stimpacks; walk forward to lower a teleporter in front of you leading to MAP16.

The secret exit is blocked by two sets of red and yellow bars, which open when you flip the switches granting access to the red and yellow keys. After doing so, follow the directions below to secret #5 and go to the end of the corridor; the teleporter to MAP32 will lower in front of you.

There is an alternative route to get the red key. Going down the steps west of the starting point will bring you to a ledge outside with radiation suits; take a suit before walking west to drop into the nukage below, then run due north to find a lift that will take you directly to the room with teleporting monsters.

After getting the blue key and either the red or yellow keys, enter the nukage surrounding the main complex and follow it round until you are due east of the yellow key room; a lift with three revenants will lower when you are in the correct place. Get on this lift and ride it up to the top to find some colored bars that you can open to get a BFG9000.

* The vertex count without the effect of node building is 4715.