MAP31: Pharaoh is the first secret map of TNT: Evilution and can be accessed via MAP15. It was designed by Dario Casali and uses a music track also played on the intermission screen. 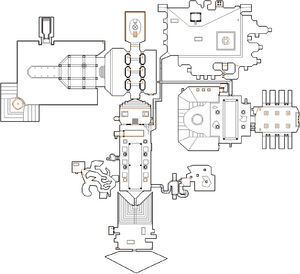 Map of Pharaoh
Letters in italics refer to marked spots on the map. Sector, thing, and linedef numbers in boldface are secrets which count toward the end-of-level tally.

You start in the outside area with sergeants and a pyramid topped with troopers. Entering the pyramid is necessary but it has to be unlocked first. Find a small grey room to the west. Inside this room on the right-hand side there is a small hanging slab. Walk around it and press the switch on it which will open the pyramid's entrance. Leave the room and enter the pyramid. In the large chamber, you can see arachnotrons. They are all encased inside invisible walls, you can see them, but they cannot see you. They all will be released soon, however. Immediately turn right in the hall and enter the alcove. Descend to a room with floating skull decorations. Enter another alcove there and descend into a room with water and brick walls. Notice several columns here. The one which is placed on the wooden "island" conceals a switch. Pressing the switch is what you need here (fighting enemies is optional). Backtrack to the main entrance area eliminating enemies teleporting into your path. Now, prepare to fight with two arachnotrons that have been released. The yellow key area is unlocked now.

In the entrance hall, stairs in the western wall have lowered. Ascend them and use the blue teleporter. This will bring you to a dark cave. Spectres appear here, particularly in multiplayer. Proceed through the cave to a lit room at the end (northwest). Here, take the yellow keycard (if there is no card at all (see "Bugs" paragraph), you can use the trick described in "Normal exit" section). With the key in hand, return to blue teleporter at the end of the cave. Again, two arachnotrons will be released. After you deal with them, proceed through the hall to the northern room with two large thrones. Here, turn right and open the yellow bar. Press the switch. This will lower a teleporter at the beginning of the level that leads to the next area, where the blue key will be eventually found. Press another switch in this room to build the stairs. Backtrack to the beginning and take the teleporter.

As mentioned, the teleporter in the starting area, right where you start facing west, has now lowered. Taking this teleporter brings you to a new area consisting of three parts. You begin in the central part facing a locked door ahead. First, go left to the western courtyard, where there is a pool of water containing a soulsphere and several revenants. Climb the stairs to the left. Turn left and approach a lever guarded by at least one mancubus. Flip it to uncover a switch on the other side. From there you may straferun and drop down to the pool. Head to the eastern courtyard. You will see several cages. Turn left and press the blue skull which will open the large wall at the end of the courtyard and unleash at least one arch-vile. Go to the end of the courtyard and press both switches. Backtrack to the entrance of this courtyard and press two new risen switches (which appear as simple blocks; the switches themselves cannot be seen at all). Head back to the western courtyard where the pool was and take the stairs to the right. Turn right and drop into a shaft in front of you. Slay the imp here and flip a switch. The locked door in the central courtyard is opened now. Go back to the shaft and press the switch to rise. Be careful, as Hell knights have been unleashed to meet you. Vanquish them and backtrack to the central courtyard and enter the aforementioned door. Take the path left and straight until you meet a torch. Then turn left and climb the stairs. You will be back in the hall of arachnotrons but do not drop there yet. Wait until the tall structure finishes sinking down. After that, turn right and press the switch. Quickly, drop down and go to the structure which is lowered as a lift. Take the lift up. From this platform drop on the blue keycard to take it. With the key head back to the starting area again and slay the arch-viles before they resurrect any arachnotrons.

In the starting area, open the blue bars blocking a teleporter. Taking this teleporter will take you to a large outdoor area, populated by mancubis and revenants, kill them all and enter the wooden structure in the center. Press the switch inside. Leave the shelter through the lowering walls and you will see the red key resting on a marble structure, guarded by several arachnotrons. Kill them, climb the marble staircase and take the key. Taking the key will cause a wall to rise and block the exit teleporter, sealing you inside the courtyard. There will also be a newly-revealed switch, flip this switch. The surrounding walls will lower, revealing the full courtyard. A single trooper will approach you, however any shooting will alert the cacodemon horde hiding in their alcoves. Go to the southeast of the courtyard and around the corner and you will find a skull switch. It will unlock another skull switch on the other side. Go to the southwest of the courtyard and turn left. Press the aforementioned switch, so the teleporter from which you came in will be unlocked. Use it to return to the starting area and the pyramid.

In the hall of arachnotrons, drop into the northern room with two thrones. To the left open the red bars. Press the switch behind and quickly go to the right throne which reveals a button. Press it and go to the opened baron wall leading to a new hall. Proceed to the next room at the north. You will see a large structure with steel pillar sinking down and stairs. Walking up each of the step will unlock walls in the previous hall. Press the button ahead and return to the previous hall. Turn left (east) and enter the room. Press the large skull switch ahead. Sergeants will teleport en masse. Slay them, then return to the hall and head west. Walk upstairs to the large open area with columns. Walk ahead to the docks and drop into the water. The large circular pit to the southwest is the exit. Drop into it.

In the normal exit area, drop to the water but do not take the normal exit. Instead, go to a small wooden building in the north and open the wall to enter inside. Here you can collect numerous health and armor bonuses. The wall to the north hides the secret switch leading to MAP32: Caribbean. Open it and press the switch.

The original version of this map has some critical flaws. TeamTNT released a PWAD that contains a new version of the map that fixes the below issues. The patch can be found on their website (archived 🏛). Some releases of Final Doom, notably the one on GOG.com, already include a fix for the yellow key issue but the line of sight issue remains unless TNT's official patch is applied.

* The vertex count without the effect of node building is 2209.