MAP31: Somewhere That's Green is the first secret map of Claustrophobia 1024 2. It was designed by TheMionicDonut, Joonas Äijälä (Jodwin) and Walter Confalonieri (daimon), and uses the music track "". 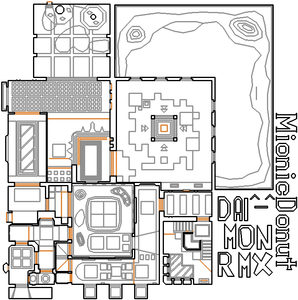 Map of Somewhere That's Green
Letters in italics refer to marked spots on the map. Sector, thing, and linedef numbers in boldface are secrets which count toward the end-of-level tally.

To get to the secret exit, you have to find all five official secrets as well as press the switch in secret #5. Then return to the final room and press any of the four switches on the pillar within the central structure. If you've found every secret, the pillar with the switches will lower, and the secret exit switch will then appear in the starting area, on the north wall of the room where the chainsaw was. Press the switch to go to MAP32: Proceed With Caution.

* The vertex count without the effect of node building is 3080.