MAP31: Space Station Skywalker is the first secret map of Whispers of Satan. It was designed by Paul Corfiatis, who also wrote the music track for this level, "Space Wars II". 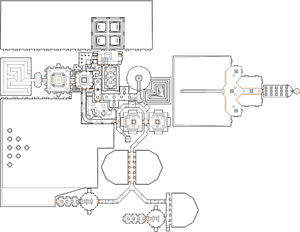 Map of Space Station Skywalker
Letters in italics refer to marked spots on the map. Sector, thing, and linedef numbers in boldface are secrets which count toward the end-of-level tally.

Open the door in front of you at the start and go through this room to the next room. In this room, there is a door to the left, five doors to the right, and the red key atop the lift in front, guarded by red bars. Take the fourth door on the right (or the second door from the lift, whichever way you prefer), into a room with a switch at the end. Flip it and head back to see a door open with a Hell knight in front. Kill him and flip the switch at the end of this square hall to open a room with imps and another switch. You have to enter the four rooms in the interior part of this square hallway and flip the switches in each room. When you are done, go back to the red key room, take the lift, and acquire the key, then head back to the starting point.

Enter the red door into the hallway and head down to the two doors. Open the right door into the cargo room. Head around the right set of crates and up the stairs to a switch that, when flipped, opens the other door in the hallway. Go through this next hallway, killing shotgun guys as well as zombiemen who sit around the terminals. Head downstairs and flip the switch to access a chamber with barons of Hell and the blue keycard. Once you get it, backtrack to the starting point and enter the blue door. Behind the blue door, you will see a yellow keycard on top of a pedestal over murky gray water. Do not fall in it, instead, head around to the door on the other side and follow the long hallway to a switch. Press it but watch out as the hall walls will lower revealing a lot of monsters. Return to the yellow key room to find that you can now get the key; be prepared for cacodemons and pain elementals when you pick it up though.

Now return to the beginning and take the yellow door south. Go through the next hall and through the door. If you look to the right, you will spot the normal exit but you cannot reach it yet, so turn left for now and follow this hall to two sets of bars, with two side doors. Inside both side rooms are several monsters and a switch. You need to flip both of them to proceed. When you have opened the bars, continue down the hallway and you will come to a fork branching to the left and to the right. You have to go through both paths in order to open up the exit, and both halls lead to two identical sets of rooms. The first room is octagonal with arachnotrons and chaingunners inside, as well as a staircase leading to the next room. The next room contains several imps and demons, and a switch that, when flipped, will open one set of bars blocking the exit. Be sure to travel down both paths at the fork and press both of the switches, and then return to the exit. Watch out for the cyberdemon as you head to the exit however.

* The vertex count without the effect of node building is 4272.