MAP31: Technology Base is the secret map of Memento Mori and can be accessed from MAP15: Karmacoma. It was designed by Denis Möller and uses the music track "Slipper" by Mark Klem.

The level is designed to place Players 1 and 3, and 2 and 4 on separate halves of the level in cooperative multiplayer, with both teams meeting only after a certain wall is lowered at a rendezvous point, rendering half of the level normally inaccessible in single-player gameplay. However, due to a design flaw, the player can enter the "inaccessible" half of the level in single-player, and consequently, Players 1 and 3 can cross over into Players 2 and 4's side early (see Routes and tricks). 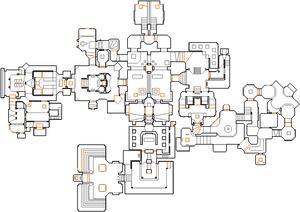 Map of Technology Base
Letters in italics refer to marked spots on the map. Sector, thing, and linedef numbers in boldface are secrets which count toward the end-of-level tally.

Take the door on the left and head around the green structure to find its entrance. Go inside and flip the switch at the end. This raises a block so you can jump to the southern window. Do so and flip the switch there to raise a block so you can reach the northern window. Jump there and flip the switch to lower the lift (but watch out as a wall of monsters is also revealed). Go down the path until you reach a silver lift. Lower it to get the red skull key, then head up to the next room. Flip the switch and walk on the right side of the pillar to lower a teleporter. Take it and open the red door in front of you. In the next room, hit the lion switch and flip the one above it to raise some walkways to the blocks where the Hell knights were. Take either one to a central room with imps on a raised area. Flip the switch to raise some stairs to this area, then head south for a lift going down. Approach the teleporter you see for the floor to lower, revealing monsters. A staircase which eventually leads back to the teleporter is blocked off, so go towards the door opposite of the staircase. Take the other door in this room (you can take the lift if you want supplies) and then flip the switch. You will spring a trap with spectres, while other monsters hear you from the other room. Also, you lowered the barrier to the staircase, so go back there and climb up to get to the teleporter.

Look out in the next room, for various zombies will attack once you make some noise. Examine the computer terminal to your right to open some nearby bars, then open the door, use the lift with the chainsaw on it, and obtain the yellow keycard. Jump through to the other room and examine the terminal on the left side and use it to raise the other half of the set of bars. Use the yellow key on the yellow door to the south. Go through the next room to the next two doors. Open either of them and head down the end of the hall to the switch. Pressing it lowers the walls around you exposing you to several monsters. Get to where they were at by taking the lift, then follow the path to the next switch. Hit this to lower part of the walkway you were on and enter the final area. Do not go near the two blocks with blood under them because they are crushers. Flip the switch to release some pens with demons inside them. Enter the northern one to find a switch, flip it to cause the ground underneath the first switch to lower. You will have to wait thirty seconds before the bars open though.

In the yellow keycard room, take the teleporter to the west. As stated in the Routes and tricks section, jump through the window. When you make it, head east towards the rocket launcher and open the door. Flip the switch behind the door to open a staircase to the east with a lot of former humans. Go through here until you find the lava pit, then jump in and open the wall with slime on it to get to the secret exit.

At the rendezvous point, right after collecting the yellow key, drop off to the western part of the room, from where you can open the door. Enter the white teleporter in the southwest to land on top of a raised teleporter platform, facing northwest. Walk straight ahead through the window in front of you. This will allow you to access the part of the level normally inaccessible in single-player gameplay. This can only be attempted once, however, and if unsuccessful, you will be unable to try again until you restart the level (or restore a saved game prior to attempting it), as you must permanently lower the platform to the ground to get back onto the teleporter again. This is the only way to access the secret exit in this level in single-player besides cheating. (See Secrets.)

* The vertex count without the effect of node building is 2210.