MAP31: The Descent II is the secret map of Hell Revealed II. It was designed by Mattias Berggren and uses the music track "Damned Spirits," by Petter Mårtensen (Thyrbse). 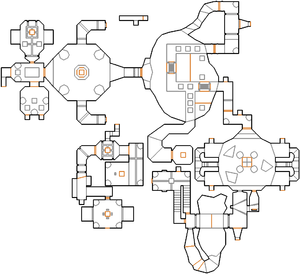 Map of The Descent II
Letters in italics refer to marked spots on the map. Sector, thing, and linedef numbers in boldface are secrets which count toward the end-of-level tally.

Normal Exit: Three paths are available right at the start. The door straight ahead houses the long elevator leading to the rest of the map. The door on the left has a super shotgun, but be prepared to fight demons, imps, and spectres. The lift on the right leads to a revenant, a plasma gun, and a rocket launcher. When you have the weapons available, head to the long elevator and shoot the gargoyle switch. Then, press the satyr switch to start the elevator. As it lowers, you will have to fight various hordes of monsters. When it reaches the bottom, you will need to kill imps, arch-viles, and an arachnotron. From where the arch-viles came from are two switches, which open the bars where the arachnotron was, allowing you to proceed. Through the next door, you can go under the bridges to reach the blue skull key, but be mindful of the massive ambush that triggers upon crossing under the bridges. In particular, the revenants on the bridge and cyberdemon need to be weeded out first. After that is done, go to the northeast corner of this cave for the blue door. Kill the monsters in the way here and open the next blue door to be on the ledges. Cross two bridges (ignore the path that forks southward for now), and open the next door, killing the barons of Hell. The next cave you come across has cacodemons, imps, and Hell knights. Grabbing the megasphere opens the paths to the sides, which have some arch-viles. You need these side paths open for later. There are two small doors in this cave, open the one on the left and kill the shotgun guys. Hit the switch to open the other door and kill the mancubi. Around the bend, kill the arachnotron, and when you approach the two doors, the floor will give way and imps will surround you. Climb the rocks to head out onto the arachnotron platform. Open either door and climb the steps up to the red skull key. Flip the switch in this room and you will have to fight some arch-viles one by one, as a wall lowers. The wall reveals another arch-vile and a teleporter leading back to the mancubi hallway. Go back to the megasphere cavern, and you will have to fight four cyberdemons on the ledges. You also need to reach these ledges via the side paths, so if they are not open yet, get on the megasphere platform and they will open. You need to flip the switches in this order: northeast, southeast, northwest, southwest. This will open the way back, which was blocked off while you were getting the red key. Now return to the revenant-bridge area and take the path forking south, where you will find more revenants and the red door. Inside are barons of Hell and a teleporter. Take it, and open the door that follows. Kill the Hell knights and imps, and then the revenants through the exit door. Flipping the switch behind the column lowers some revenants, as well as the normal exit teleporter with an arch-vile. 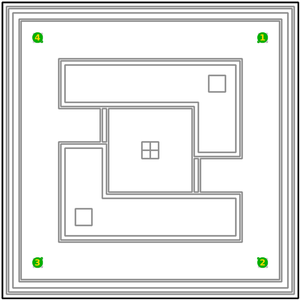 * The vertex count without the effect of node building is 1531.