The Express Elevator to Hell is a map that is part of the Master Levels for Doom II. It was designed by Sverre Andre Kvernmo (Cranium), and is contained in the file TEETH.WAD, along with the secret level, Bad Dream. 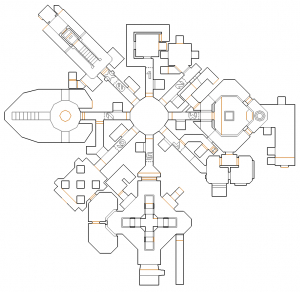 Map of The Express Elevator to Hell
Letters in italics refer to marked spots on the map. Sector numbers in boldface are secrets which count toward the end-of-level tally.

You start on the rounded lift that is immediately lowered as a monster standing before you crosses the line to activate the lift. There are eight floors in total. Entrances of each floor are indicated by a number on the floor and ceiling. There are also three optional keys in the level that are necessary just to get to the secret level.

The bars will automatically close as you try to enter the floor. Give 30 seconds while they are closed and return. Walk around to get to the room where you can only peer through windows. Flip the switch, deal with knight/baron, flip the switch to unlock the bars leading to the second floor.

In the second floor enter the dark room. Enter the red teleport pad. You will be teleported to the structure of the fifth floor. Find and press the button there to unlock bars in the third floor.

Open the door. In a room press the first button below to activate the lift in the middle. From the lift drop down on the stand to press the second button above that unlocks the fourth floor.

You could enter the door first and in this alcove (note that you can also visit this place without needing to unlock the bars) stand on the button indicated by two arrows to ease your task by killing one of three mancubis with crusher, however this can make it difficult to grab the medikit located right under that crusher. Walk across the opened bars. Open the door. In the balcony where one mancubus is/was open another door. Enter the dark room. Killing several mancubi press the button in the end to unlock bars in the fifth floor.

In the fifth floor open the door before you. In that room you can see a button in the alcove located in the north-eastern corner. Lower two actual platforms before. In the top press the button to unlock the bars in the sixth floor.

Just press the button in the next room of this floor to unlock the bars in the seventh floor. Note and beware zombies in the cages and revenants that are revealed in all floors of the level.

Open the door behind you. Lower a lofty lift. In the top walk up the stairs. Get to the other side where a skull lever is placed that unlocks the last bars in the eighth floor.

Walking past two lamps, open the door. Walk upstairs and try to open the "fake" exit door. Two either walls open. Enter the western one. Flip the switch to lower a platform in right of you. When you rise flip another switch to open that, in fact, real exit door. Come back towards the opened door. Enter the blinking gates to beat this level.

In the room of fourth floor the three rockets are placed a bit carelessly that in result the third one (thing 150) is placed outside the map.