MAP31: The Lot is the first secret map of H2H-Xmas. It was designed by Zack Lawson (Zeek) and uses the music track " ". 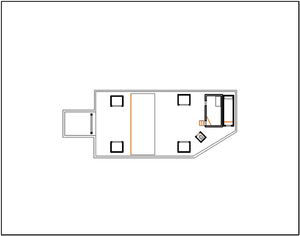 Map of The Lot
Letters in italics refer to marked spots on the map. Sector numbers in boldface are secrets which count toward the end-of-level tally.

Although you can enter the secret exit room, you are unable to grab the items on the other side, including an invulnerability sphere and a megasphere which count towards the end-of-level tally. The maximum number of items possible for this map is 33%.

* The vertex count without the effect of node building is 194.