MAP31: The Manliest Fight EVER is the first secret map of Deus Vult II. It was designed by Huy Pham (Doom Marine) and uses the music track " ". The par time defined in MAPINFO is 2:00. 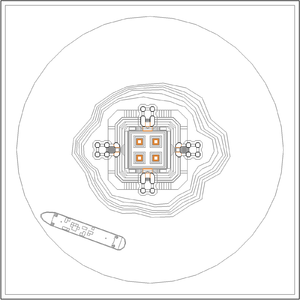 Map of The Manliest Fight EVER
Letters in italics refer to marked spots on the map. Sector numbers in boldface are secrets which count toward the end-of-level tally.

To exit the level, you need to step on the four pillars in the center where the mancubi were.

Although you get all the supplies you need at the start, it is possible to get more powerups. If you press use on the faces (the ones guarded by cyberdemons), they function as switches, and if you hit all four on the north and south sides, you will gain partial invisibility. Likewise, if you hit the four switches on the east and west sides, you will gain invulnerability.

* The vertex count without the effect of node building is 1338.