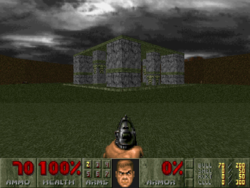 The spiderdemon arena in The Temple.

MAP31: The Temple is the first secret level of The Abyss. It was designed by Miklos de Rijk (H2SO4), based on Sandy Petersen's MAP01: Entryway. This level contains the first entry room and hallways of Petersen's original, with the UAC door leading to a large circular arena containing a spiderdemon and teleporting monsters. This map, along with MAP10: Hangar, may explain exclusion from the idgames archive until 2015. 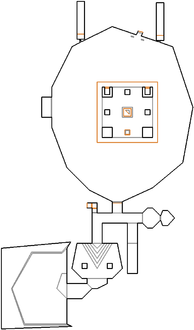 Map of The Temple
Letters in italics refer to marked spots on the map. Sector numbers in boldface are secrets which count toward the end-of-level tally.

Unless you have picked up ammo from the previous levels, this level may be impossible to max due to the lack of ammo. Infighting may be the only sure way to get 100% kills.

To reach the secret exit, push the middle pillar in the arena to reveal a switch. Hit it, and run back to the hallway. A door should have opened in the corner. Go to the opened area and use the two walls within to warp to the second secret level.

This level can be easily speedrun, given that you don't take much damage as you pass the spiderdemon. Hit the exit switch in the arena as fast as possible.

Grab the megaarmor and invulnerability, then race for the exit. The spiderdemon may block the exit, so a good time may depend on the position of the monsters.

* The vertex count without the effect of node building is 252.