MAP31: Vibetech is the first secret map of 2048 Unleashed. It was designed by Joshua O'Sullivan (Dragonfly) and uses the music track "dD Extraction theme" from Perfect Dark. 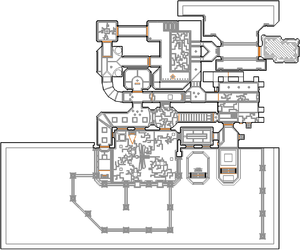 Map of Vibetech
Letters in italics refer to marked spots on the map. Sector, thing, and linedef numbers in boldface are secrets which count toward the end-of-level tally.

Watch out for the black areas in this level, as they have a brightness of zero and enemies standing in them may be hidden from view.

Collect the shotgun in front of you (on I'm Too Young To Die and Hey Not Too Rough skill levels) then open the door on your right to kill a shotgun guy. Use the next door and it will lower to reveal a room with imps, then head south up a curved staircase and kill a chaingunner waiting at the top. Follow the passage and kill some imps ahead on Hurt Me Plenty (HMP) skill level or higher (plus a Hell knight that rises from the floor) then flip the switch at the end of a hallway lined with health bonuses to open a door ahead and reveal one or two revenants on HMP or higher. Go through the door and head forward until the floor lowers, dropping you into a room with imps in alcoves.

Step into the white star teleporter at the south end of the room to reach one of the alcoves then shoot the switch ahead of you to lower a staircase next to it. Climb the stairs to a red key door then turn right and open another door which has a berserk pack in front of it, kill the chaingunner and shotgun guy waiting behind it then climb the stairs to the top and head through the door on your left to enter an outdoor area with a megasphere - only pick this up when you need it. Look north-west to see a switch next to a pillar holding the red keycard. Approach the switch and kill some demons and shotgun guys that teleport in, then flip the switch and head back through the entrance door to kill a revenant that has teleported in.

Head north through a wall that has opened (there will be more revenants here on HMP or higher) to return to the passage that was lined with health bonuses, then turn left and left again to enter a room with a rocket launcher guarded by a pain elemental. Follow the passage here to a door and go through it, then flip the switch here to lower the pillar with the red key and release one or two arch-viles into the room below. Use the pillars that have risen from the floor below as cover, take the key then go back down the stairs to the red key door you encountered earlier and go through it to confront one to three cacodemons. Flip the switch in the south-west corner to lower a lift with a chaingunner and ride it up to a small chamber with a mancubus - kill this monster then look through the window behind it to see a switch that you can shoot.

Take the lift back down to kill some imps and step through the bars that have opened, then go through the white portal in front of you. The portal will put you in front of an open door marked "EXIT" - kill the arch-vile waiting behind it (and one or two revenants on HMP or higher) then open the door at the end of the hall and step into the blue room behind it to move on to MAP16: Mob Quad.

To reach the secret exit you must shoot two switches - one is in secret #1, while the second is the switch that opens the bars blocking the south-east portal. Shooting both switches will reveal a star teleporter north of the portal - step into it to be taken to a second portal with the words "SECRET EXIT" written on the floor in front of it. This second portal leads to MAP32: Scalpel Tart.

The room east of the start point contains a chaingun. Approaching it will lower a floor with some imps, plus demons and a chaingunner at higher skill levels.

Just before the passage lined with health bonuses are two doors. The north door can be opened to find a super shotgun - approaching the weapon will lower the surrounding walls and reveal (depending on skill level) knights, demons and shotgun guys.

* The vertex count without the effect of node building is 6607.