MAP31: Vorticon is the first secret map of Doom 2 the Way id Did. It was designed by Brendt Pantley (Megalyth) and Xaser and uses the music track "Make It Tighter" from the fifth episode of the Commander Keen series. The par time defined in the DEHACKED lump is 4:30.

The level itself is inspired by the game Commander Keen and features textures, two new enemies and five various levels of the original game, interpreted into Doom and merged into one level. 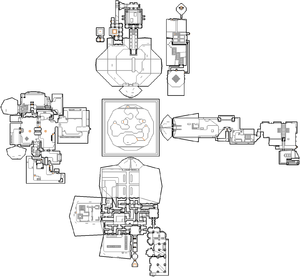 Map of Vorticon
Letters in italics refer to marked spots on the map. Sector, thing, and linedef numbers in boldface are secrets which count toward the end-of-level tally.

* The vertex count without the effect of node building is 5482.