MAP31: Wolf 3D is the first secret map of Mars War. It was designed by Nathan Lineback and uses as music an edited version by Nathan Lineback of "clouds.mid" called "Bill Gates Sucks!", originally composed by Brian Orr for an easter egg present in Windows 95's Shell32.dll.

As the name suggests, it is a conversion to Doom of E1M1 from Wolfenstein 3D. According to the text file for the WAD, it was made prior to the release of Doom II, which happened to ship with its own conversions of Wolf3D levels as secret levels. 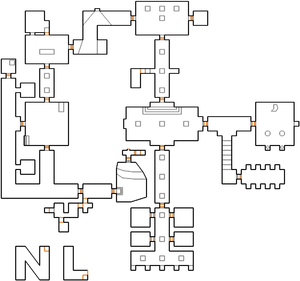 Map of Wolf 3D
Letters in italics refer to marked spots on the map. Sector, thing, and linedef numbers in boldface are secrets which count toward the end-of-level tally.

* The vertex count without the effect of node building is 712.