MAP31: World of Wonders: The Planet of Living Rock is the first secret map of Perdition's Gate. It was designed by Mackey McCandlish (Avatar).

There is no plot specifically for this map. 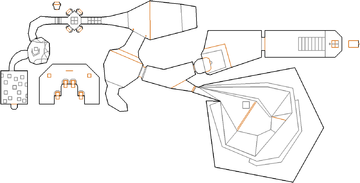 Map of World of Wonders: The Planet of Living Rock
Letters in italics refer to marked spots on the map. Sector, thing, and linedef numbers in boldface are secrets which count toward the end-of-level tally.

Drop down the hole in front of you into a large chamber where you will land on a berserk pack. You can either run straight into the teleporter between the two lamps, in front of you, or you can battle the zombies and lost souls here for some supplies.

Once through the teleporter you will end up in a small area full of pillars that will start to move as soon as you do. Head to other side of the room, battling the imps and revenants, into a small area with stairs running around its edge. Head up these stairs, down the corridor and up some more stairs to find an arch-vile and a mancubus waiting for you at the top and a baron of Hell in the distance taking pot shots at you.

As you head toward the baron, you will fall through the floor into a completely white area. Behind you, two brown pillars will rise to show you where to go. In the area beyond the pillars, you will see a megasphere. However the ceiling will lower over it as you approach and an area to your side will open up. Head into this new area to be presented with two doors, one locked.

Open the unlocked one to find a marble area with water running around the edge. The yellow key is at the far end of this room. Pick it up and a cyberdemon will rise out the ground to fight you. Any attempt to run back to the door and escape will lead to you being teleported back to where the yellow key was (the two lamps...). Hence you must jump into the water surrounding the room where you will find another teleporter that will put you by the door allowing you to escape.

Go through the yellow door you now have the key for and walk in, to again fall down a hole. When you land move forward to open walls around you, unleashing a group of imps.

Move forward in the darkness to cause a wall to lower revealing a raised platform in the distance. As you approach this platform, stairs will raise between the lamps allowing you to get on top of it, where you will find the exit teleporter and also a megasphere sitting in the middle of it...

It is possible to grab the first megasphere even once the ceiling has lowered over it by pushing against the wall.