MAP31: Zona secreta is the first secret map of Doom 2 in Spain Only. It was designed by Justin Kelly (Breezeep) and Richard Frei (Tarnsman) (credited as Drug Shuttle), and uses the music track "Gene's Rock a Bye," originally composed by Masafumi Takada for God Hand, sequenced to MIDI. The par time defined in MAPINFO is 2:00. 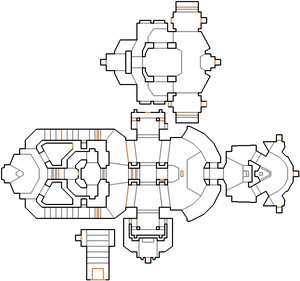 Map of Zona secreta
Letters in italics refer to marked spots on the map. Sector, thing, and linedef numbers in boldface are secrets which count toward the end-of-level tally.