MAP32: Anger Management is the thirty-second map of Kama Sutra. It was designed by Jakub Razák and uses Rise of the Triad's arrangement of Remo Giazotto's "Adagio in G minor".

Method made this great map and I quickly became addicted on it. On the other side I don't remember if I ever completed it but I don't think it's a big problem :). Method took an inspiration from Doom E4M8 I think. 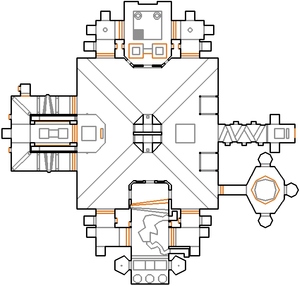 Map of Anger Management
Letters in italics refer to marked spots on the map. Sector numbers in boldface are secrets which count toward the end-of-level tally.