Bad Dream is a part of the Master Levels for Doom II, designed by Sverre Andre Kvernmo (Cranium), and is a secret level contained in the file TEETH.WAD, along with The Express Elevator to Hell. 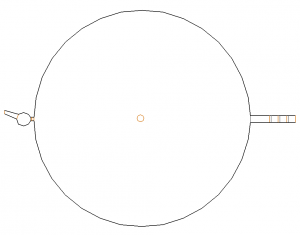 Map of Bad Dream
Letters in italics refer to marked spots on the map. Sector numbers in boldface are secrets which count toward the end-of-level tally.

You start in a small room facing a chainsaw and a small door. Open the door. There are a crowd of cyberdemons and a spiderdemon, which is stuck in the wall and unable to move. Fire any weapon to wake up all the cyberdemons. As they begin to attack you with rockets, they will kill the spiderdemon blocking your way. When it is dead, walk inside the circular room and you will be teleported to the small alcove on the eastern end. Drop down and head to the center of the circular room. Take the invulnerability that is placed on the platform. A slow crusher consisting of most of the room will activate, and will kill all of the cyberdemons. Grab all three multicolor keys and get back to the western side where you began the level to again use the hidden teleporter. Back in the eastern alcove, open all the doors one by one. You will encounter a Hell knight, a pain elemental and a baron of Hell behind each door. Flip the switch at the end to finish the level.

Once the cyberdemons begin firing rockets, the number of things seen simultaneously will quickly increase to 128, which is the maximum in the Doom rendering engine, causing sprites to flicker in and out of view.