MAP32: Bitter Herb is the super-secret map of Requiem. It was designed by Adam Windsor, and uses the music track "Tides of War" by Jeremy Doyle. It is unusually small and short in comparison to most of the levels in the megawad.

Completing this level takes the player to MAP16: Escape from Chaos. 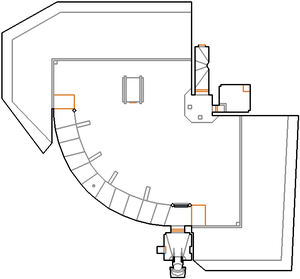 Map of Bitter Herb
Letters in italics refer to marked spots on the map. Sector numbers in boldface are secrets which count toward the end-of-level tally.

Open the door in front of you and kill the chaingunner. Grab the rocket launcher and drop into the field collecting supplies as you engage in combat against several cacodemons. The yellow key is in this field, so be sure to pick it up. Head northeast and open the yellow door to confront several demons and two arch-viles. Go into their room and press the switch. When you head back outside, some imps will be on the platform so kill them. Then open the door near the yellow door to confront a chaingunner and a baron of Hell inside the exit room.

* The vertex count without the effect of node building is 284.