MAP32: Castle Indigo is the thirty-second map of Project Einherjar. It was designed by Mike MacDee (Impie) and uses the music track "". 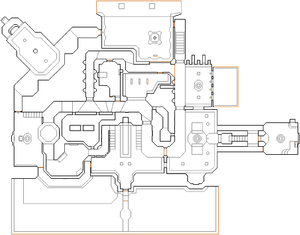 Map of Castle Indigo
Letters in italics refer to marked spots on the map. Sector, thing, and linedef numbers in boldface are secrets which count toward the end-of-level tally.

The castle is a sprawling maze of corridors and statues. Once you start shooting, the inhabitants will scatter all over the castle in their attempt to sniff you out. You can take a defensive position in the foyer and blast them when they appear, but beware the Lancer hiding in the head of the giant Jotun mural.

When the castle interior is safe, go out into the backyard and press the switches to lower the yellow key: middle, right, then left. It opens the doors to the ballroom: killing the Lancer on the balcony reveals the stairs to the balcony in the starting room with the blue key. Resupply before grabbing the key and triggering another castle-wide ambush that includes multiple Einherjar. You can also use the yellow key to loot the Governor's bedroom.

The blue doors both lead to the same destination: a large shrine to the late Baron Frostgard, two Hreidmar brothers, and Governor Borg himself. Kill or evade them and hit the shrine switch to reveal the exit.

Governor Borg is very weak, only twice as tough as a Thane. However, he packs a pair of Gauss cannons that kill just as quickly as the Baron's in The Iron Invasion. A rocket or two will drop him right away and give you breathing room to deal with the Hreidmars.