MAP32: Dances with Demons is the super secret level of Memento Mori II. It was designed by David Kuykendall and uses the music track "Mizshunn Impassable" by David "Tolwyn" Shaw. 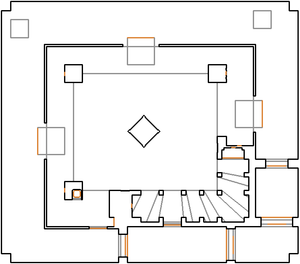 Map of Dances with Demons
Letters in italics refer to marked spots on the map. Sector, thing, and linedef numbers in boldface are secrets which count toward the end-of-level tally.

You begin in a corner of a central courtyard. Grab the box of shells, clear out the imps and head into the courtyard - you've got quite a number of mancubi to deal with. Your first job is to flip three switches that lower platforms blocking you from accessing the perimeter of the courtyard. While you can progress the level by lowering just one, you'll need all the freedom of movement you have later.

Flip these switches, then head into the outer courtyard. You will be harassed by demon packs. If you want to save some ammo, you can leave some of them alive for now. Make your way to the southwest of the outer courtyard, where the yellow key is. Press use of the wooden door next to it, and it will lower, helping you make a quick getaway. Quickly proceed to the yellow switch on the northwest pillar and flip it.

Arachnotrons will begin teleporting into various spots around the level. With some skill, you can let them clean up the demons for you with their plasma guns. On the harder skill levels, you can thank them later by making them sacrificial pawns against a far greater enemy.

Next, head to the southeast of the outer courtyard. Grab the blue key from here, and stock up on rockets. Rush to the blue switch on the northeast pillar, and flip the switch.

Now comes the hard finale. You are faced with a boss monster that varies with your difficulty level, along with six lost souls:

On Hey, not too rough and below, this shouldn't be too much of a problem. However, on higher difficulties, you have a significantly bigger problem. Deal with the lost souls first, so that you don't blow yourself up with a rocket. Feed any remaining monsters to the cyberdemon's rockets. When it comes down to you and the cyberdemon, it will be down to using everything you have and dodging throughout the level to avoid being blown up.

Whether you to choose to stand your ground or make a run for it, head to the southwest corner of the outer courtyard and grab the red key. Flip the red switch on the southwestern pillar, and the southern part of that pillar will open up. Step into the hole in the floor to exit the level.

In comparison to other levels in Memento Mori II, this level contains a very simple layout. As a result, it is a popular map for speedrunning. It is possible to complete the level on Ultra-Violence or lower without firing a shot, but it requires some expert maneuvering, lest the Demons on the outer side of the level gang up on you. Thus, the current UV speed record is also a UV pacifist run.

* The vertex count without the effect of node building is 397.