MAP32: Duality is the second secret map of TNT: Revilution. It was designed by Steve Muller (Kyka) and Micah Petersen (Jaws in Space), and uses the music track "I Don't Want You To Leave (Regretful Edit)," by Viscra Maelstrom. The par time is 3:30. 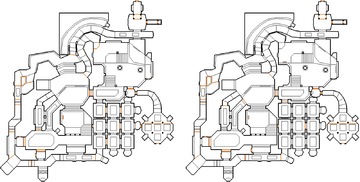 Map of Duality
Letters in italics refer to marked spots on the map. Sector, thing, and linedef numbers in boldface are secrets which count toward the end-of-level tally.

* The vertex count without the effect of node building is 2366.

This level is one of seven in Revilution that was originally part of TNT 2: Devilution, having been cut from the project in 2014 during the events that led to Revilution becoming its own project. Originally a much larger level with about 900 monsters, it previously occupied the MAP29 slot, and was named Viridian Twilight. Following the departure of Steve Muller (Kyka) from the project, it was cut down significantly and rearranged to use the concept of teleporting between two versions of the same map.

From Revilution's beginning, MAP32 was intended to be an ice-themed map. Several mappers made attempts at creating the level, but none were successful until Micah Petersen (Jaws in Space) created a large map named Europa, which took place on Jupiter's moon of the same name. Europa received mixed views during the beta period, and was subsequently scrapped along with the ice concept for the slot. Due to its special concept, Duality was moved to MAP32 to replace it.