MAP32: Enoz Soahc is the thirty-second map of Scythe. It was designed by Erik Alm, and uses the music track "Level" from Hexen's Hub 5: Dark Crucible. 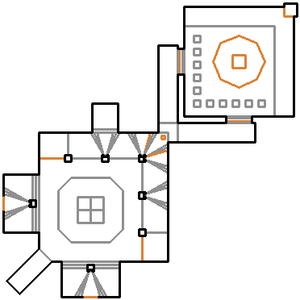 Map of Enoz Soahc
Letters in italics refer to marked spots on the map. Sector numbers in boldface are secrets which count toward the end-of-level tally.

This map focuses on two small courtyards with many small monsters attacking you in both of them.

Enter the small yard and make sure to grab weapons in preparation of the monsters. Grabbing the rocket launcher triggers a wall to lower with monsters inside. Also, monsters will teleport onto the demon pentagram in the center. Inside of the chamber behind the wall is a switch that lowers another wall, with the same monster setup. The switch behind this wall opens a compartment with an arch-vile and a yellow skull key, and releases a final batch of monsters in the center teleporter. Make sure to grab the key and open the bar where the rocket launcher was to leave the first courtyard. When you drop down onto a berserk pack, four Hell knights will attack, two at each side. Get past them and open the door into the final courtyard. Collecting the megasphere in the middle causes the northeast column to lower. While it is lowering, numerous monsters will attack from behind, so fend them off and when the column lowers, exit.

* The vertex count without the effect of node building is 416.

This map's title reads Chaos zone if spelled backwards. Those who are acquainted enough with Doom WADs should be able to recognize the inspiration, Adam Windsor's Chaos Zone.