MAP32: Halls of Disarray is the thirty-second level of Eternal Doom. It was designed by Matt Bollier (his only contribution) and uses the music track "Cacophage". This map was added with the second megawad upgrade (Eternal II, which contained no MAP31 or MAP32) as MAP15, and later moved to slot 32 in the third upgrade. Same as with MAP31, it is mandatory to complete this map in normal megawad progression. 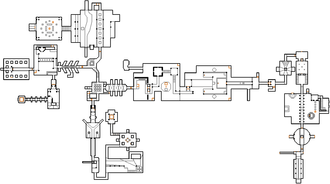 Map of Halls of Disarray
Letters in italics refer to marked spots on the map. Sector, thing, and linedef numbers in boldface are secrets which count toward the end-of-level tally.

Do not shoot the first imp you come across unless you are ready for a big crossfire. It is easier to avoid.

The only real puzzle of any kind here is the blue key. But just press the blue torch in the same room to reveal it (all the other torches are red).

* The vertex count without the effect of node building is 2496.