MAP32: Hectic is the first secret level that can be found in Doom 64 and is considered to be the most difficult level in the game. A virtual easter egg, finding it requires execution of an obscure procedure on MAP01: Staging Area. From a chronological standpoint, this level is where the player can first come across Hell knights and arachnotrons. Each of the three Doom 64 level designers created one of the three respective challenge rooms: Randy Estrella made the arachnotron room, Tim Heydelaar made the trapped lift room, and Danny Lewis made the Hell knight room. This level uses the music track "Spaces Between," also heard in MAP04: Holding Area. The reward for finishing this map completely is the game's "Features" menu, where cheat codes and additional secret levels can be accessed.

In a textual intermission before the level begins, it is described as follows:

"Congratulations, you've found... Hectic. Only the best will reap its rewards."
― Doom 64 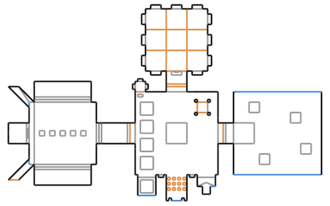 Map of Hectic
Letters in italics refer to marked spots on the map. Sector and Thing numbers in boldface are secrets which count toward the end-of-level tally.

All items in the beginning room are booby trapped. Some of the traps can be overcome (see the Items section) with varying degrees of difficulty, but failure will lead to death. Open the door on the right and enter. Pick up the red key. You will then be lowered into a room with no exit. Immediately, arachnotrons will appear. Pick up the rockets scattered around the room and dispose of the arachnotrons. Due to the limited space available, this is difficult to achieve, as the arachnotrons can corner you if you are not careful, and there is always the possibility of splash damage from one of your rockets. When they are finally killed, a crusher activates but only once; You can avoid this by standing in one of the yellow areas and then you will be allowed back up to the starting room.

Now enter the door which was on the left when you first started the level. Cross the stepping stones across the blood to collect the items and the blue key, but beware of the crusher that immediately starts overhead. Turn around, and you will see that the door behind you is now closed. You must deal with two Hell knights on each side of the very narrow bridge and must kill all of them in order to reopen the door. You must not fall off of this narrow bridge, either by accident or by being pushed off by of one of the Hell knight's attacks, as the blood pit is inescapable. It is best to use the side strafe exclusively to dodge attacks while unloading rockets at the enemies.

Now enter the final door that has not yet been opened. Use the lifts to move to the yellow key, but take care not to get hit by the darts thrown by demon faces on the walls. Once you have the yellow key, return to the red bars in the starting room and unlock them, then unlock the blue and yellow bars and exit the level. When you arrive in MAP02: The Terraformer, the "Features" menu will become available. Note that it does not remain unlocked, however, if you quit the game and restart from a password.

There are only seven enemies in this map (four Hell knights and three arachnotrons). You have to kill them all to reach the true exit.

There are no official secrets in this map. Even if you head for the easy exit as soon as you enter the map, you will still be awarded a score of 100% for secrets on the completion screen. However, the main goal of the map is to try for the hard exit.

You can take advantage of the aforementioned soulsphere trick (see Items) as it is also a glitch which nearly eliminates the challenge factor in the map.

When you successfully collect the soulsphere, without getting caught, the columns' script causes all the other scripts for the map to remain paused, due to the limitations of the game's programming. This will allow you to safely collect the blue and red skull keys, without triggering their corresponding traps.

The only room that remains unaffected is the yellow skull key room with the moving floor sections and dart traps, however being a relatively easy room to escape, that is negligible. You can then use the keys to open the colored pylons which block the true exit switch and exit the level with access to the "Features" menu in the pause screen.