MAP32: In the Thick of It (Simplicity)

MAP32: In the Thick of It is the secret map of Simplicity. It was designed by Melissa McGee (Agent Spork) and uses the music track "Suck This", originally created by Lee Jackson for Rise of the Triad. The par time defined in MAPINFO is 3:00.

This level is themed after Rise of the Triad and includes weapons, enemies and objects from that game. 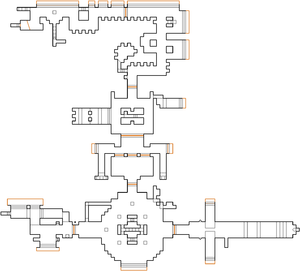 Map of In the Thick of It
Letters in italics refer to marked spots on the map. Sector, thing, and linedef numbers in boldface are secrets which count toward the end-of-level tally.

Walk forward to collect a dual pistol then turn right and go round the corner to confront some low guards and a lightning guard. Open the doors behind to find a large gray structure protected by several more guards, then go to the north side to find a second door (you can step on the nearby bounce pad to reach the overhead score pickups if you want them). Open the second door and blow up the barrels to kill the guards waiting in the chamber, then open any of the three doors ahead before going on to another, wider door. Open this door and kill the two lightning guards waiting on either side, then head round the dark-gray brick wall in front of you to find two more lightning guards next to another door.

Open this door then follow the path east and north past some more guards until you get to some fences, then proceed west to another door protected by a lightning guard as well as a high guard. Open the door then continue west past several more guards to a small archway with blue triangle signs on either side, then go through this archway to finish the level.

From the gray structure, go through the east door and time your run past some spinning blades and moving walls to find a firebomb. Taking the weapon will open two compartments behind you with score pickups as well as low and lightning guards.

* The vertex count without the effect of node building is 1075.