MAP32: In the Void is the second secret map of Doom 64 for Doom II. It was designed by Elric Sullivan (DILDOMASTER666) and Brett Harrell (Mechadon), and uses a MIDI rendition of "Blood Red Shadows" from the Doom 64 soundtrack, composed by Aubrey Hodges, and sequenced by Michael Barrette, with modifications by DILDOMASTER666.

In single-player, this is the only map where the player can encounter a Nightmare Cacodemon, a custom monster otherwise exclusive to cooperative play. 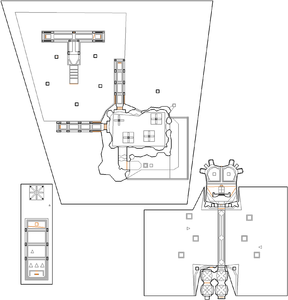 Map of In the Void
Letters in italics refer to marked spots on the map. Sector numbers in boldface are secrets which count toward the end-of-level tally.

* The vertex count without the effect of node building is 1987.