MAP32: Jailhouse Roll is the thirty-second and final map of 32 in 24, a deathmatch megawad. It was designed by leileilol and uses the music track " ".

It was the author's third map for the project, following The Hanger and Brick Face, a map that was ultimately cut from the final WAD. Overall it was the thirty-eighth map to be submitted, and also the last map to be submitted. It arrived 28 minutes after the 24-hour mark had passed, but according to the author, it had to be restored from a backup at the last minute due to the WAD file becoming corrupted. It took about half an hour to build. 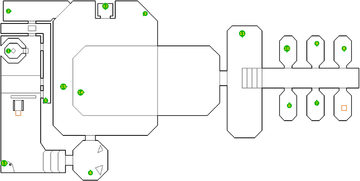 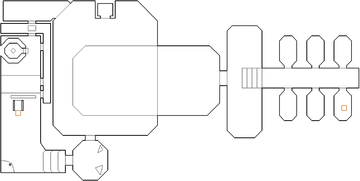 Jailhouse Roll occupies a large map area of almost 6000x3000 map units, making it the second largest map in the WAD by playable map area, after The Hanger, incidentally by the same author.

The map is named for the prison in the east of the map, which has six holding cells branching off of a long empty corridor. Although there are bars covering them, it is possible to walk through these to move in and out of the cells. Each cell contains something different. The north-east cell contains only four health bonuses, the north-centre contains a green armor, the north-west contains a single medikit, the south-west contains a BFG9000, and south-centre has a berserk pack. The south-east cell has no items, but features a teleporter (with a misaligned texture) that leads to a dark hallway in the north-west of the map. You will receive a shotgun upon arrival, and some bullet boxes and stimpacks can also be found up here.

It is possible to jump out of the windows in this hallway. Jumping out of the windows on the south or western walls drops the player into a large, L-shaped outdoor area. At its north-end there is an octagonal structure housing a rocket launcher, and a berserk pack can be found just outside the structure's south-west exterior. There also four boxes of rockets just outside the building. Towards the south of this area, players can find a tower with a lift on its southern edge that can be ridden to find a super shotgun. It is also possible to run along the top of the wall next to this tower to access the dark hallway mentioned earlier.

There is a small canopy in the south-west corner of the L-shaped area, where players can find an energy cell pack, useful if they have the BFG. To the east of here are some steps leading up to a chaingun and a dark octagonal room, which contains no items but links to a huge outdoor area in the centre of the map. A small extension to this area is where you will land if you jump out of the north window in the dark hallway, and this puts you close to the megaarmor.

This central area is vast and mostly empty, but along its northern edge is a small room containing a soulsphere. At the area's middle is a huge pit with a water floor at the bottom. Players can find a plasma gun in the middle of this pit, and under the canopy to the east they can find four energy cell packs. At this eastern end of the water pit is the entrance to the jailhouse. A super shotgun can be found at the southern end of the entrance hall, and a steep staircase leads down to the main jail area.

This level contains fifteen spawn points. This is tied with MAP24 for the most spawn points of any single map in the WAD.

* The vertex count without the effect of node building is 252.