MAP32: Mostly Harmful, designed by Yonatan Donner, is the second secret level of Hell Revealed. It uses the music track "CCCool" from Rise of the Triad. The level's name is most likely a reference to Douglas Adams' book "Mostly Harmless" (Ford's edit of the Earth entry for The Hitchhiker's Guide to the Galaxy).

You have gone through a lot to get here - found many secrets and shown you deserve to get to the super-secret level. And this level is the deadliest of them all - not to mention it's extremely difficult to get rid of all the monsters here, new ones are created all the time! So you are racing against time. You will need all 3 keys to enter the exit - and only the dead are allowed to leave! The level also has some nice effects, like bridges you can go both above and under, arches that curve both below and above, and anti-coward tricks. See how fast you can finish this one on Ultra-Violence, if you can! 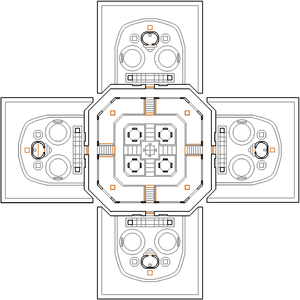 Map of Mostly Harmful
Letters in italics refer to marked spots on the map. Sector, thing, and linedef numbers in boldface are secrets which count toward the end-of-level tally.

The level consists of a building and four nearly identical yards. The yard located in the south is where you spawn. After entering the building, go right to the yard in the east and take the yellow key. Then go to the northern yard and grab the blue key. After this move to the yard in the west and get the red key. Now go to the middle of the map, and stand on the green spawn shooter platform and let your health be depleted. After your health reaches a low enough value, the level will be exited. (Notice: On skill levels 1 & 2 you do not need to do this. Instead you have to kill the Romero's head to exit the level.)

Although Mostly Harmful is listed as having "You're Dead" difficulty, it can be tackled fairly simply with speed, strategy, and a little bit of good luck. The overall plan is

Clear out the starting room[edit]

Grab the BFG9000 behind you, then rush and pick up all of the weapons lined up in front of you. You will not need most of them but you do not want to walk over and suddenly switch to the chaingun in the middle of a fierce firefight later! Use the two square panels at the sides of the room for cover while you pick off the four arch-viles, two cyberdemons, and any other minor resistance with the BFG. There are three cells each on either side of the room. The area behind the starting position (containing the teleporter to the moat) can also be used for cover. There are tons of medikits and a megaarmor in this room, so don't worry about taking some damage.

Clear out the inner moat[edit]

Jump into the teleporter behind the starting position to reach the moat (and the level's only secret area). Each side of the moat contains a megasphere, an arch-vile, Hell knights, cacodemons, and a lot of cells and rocket ammo. The arch-viles are your top priority but the cacodemons also command respect, as they block movement and can bite from above. If you lose control of the fight in the moat, taking any of the four teleporters take you back to the starting room, where you can replenish your health and dive back in.

Once the moat is clear, use the BFG or rocket launcher and fire into the crowd of revenants visible through the long rectangular windows overlooking the moat; you are almost completely safe from the revenants here. Monsters will spawn at the four corners of the moat, but for the most part should not present any significant resistance.

Once the revenants are mostly dead, go back to the starting room and open the door. Any surviving enemies in the outer walkway will swarm in; kill them. You now need to travel counter-clockwise around the walkway to three areas almost identical to the starting area; each area contains a key where the BFG was found at the start of the level. The easy way to get these keys is to rush in and out. Fire the BFG just as you open each door to clear out any monsters blocking your way to the key (there aren't any at level start, but the cube spawner might place some there). Run to the key, turn around, and fire a second BFG shot to clear out any enemies blocking your way back to the door. There are four megaspheres in the outer walkway of the inner room, so you can completely heal after each key.

Once you have all three keys, you need to clear a path to the center of the level and die there. The outer perimeter of the center contains four soul spheres and plenty of cell ammo, with which you should have no problem killing enough barons of Hell to reach the exit platform. Dying there should present no problems.

* The vertex count without the effect of node building is 1571.