MAP32: No Guts No Glory is the super secret map of Alien Vendetta. It was designed by Anders Johnsen. In the first release of the megawad, this map uses a MIDI rendition of the song "Enter Sandman" by Metallica. In the second release, it uses the theme of Heretic's E1M9: The Graveyard. A small but rather tough map, No Guts No Glory is similar to MAP22: Resistance is Futile from Hell Revealed - its distinctive style was also recreated in several other WADs. The par time defined in the executable is 4:00. 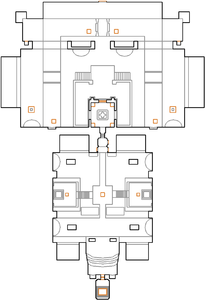 Map of No Guts No Glory
Letters in italics refer to marked spots on the map. Sector, thing, and linedef numbers in boldface are secrets which count toward the end-of-level tally.

This will be a difficult map with hordes of monsters expanding two yards. Your starting room holds several key weapons, while ammo and health are just outside. Be mindful of enemy locations, especially if you are playing on Ultra-Violence. There are arch-viles and barons of Hell in the cages, spider masterminds in and around the nukage moat, and cyberdemons on the bridges. Demons and arachnotrons are roaming the immediate grounds, and imps and mancubi are to the sides and north, respectively. Hell knights and barons are in the nukage moat and there are two ledges of revenants facing the mancubi. There are also two cyberdemons in the upper left and upper right corners of the first courtyard. If you are feeling lucky, you can enter the nearby teleporters to telefrag them, though they may not be in position all the time. Your goals in the first courtyard are to get the red and the yellow skull keys, both on the sides of the courtyard. They are out in the open, but picking them up releases walls of revenants. When you are sure to leave the courtyard, head to the north and press on both the red and yellow switches. Now head back to the starting room to find the door open. Inside are two arch-viles and a switch to lower the platform you are on to the second courtyard.

The second courtyard will prove more difficult than the first. Again, there are arch-viles and barons in the side cages, revenants in the cages in front of you, and Hell knights on the walls. There are also two ledges with chaingunners in your immediate vicinity. Two cyberdemons are hiding behind metal pillars at the end. If you grab the blue key, walls open up all around you revealing revenants and pain elementals. If you attempt to climb the steps to the megaspheres, you will unleash a cyberdemon. Unlike the previous courtyard, the nukage here is not damaging, but you will likely run into trouble while fighting the monsters. Make sure you keep the BFG9000 handy. When you are finished, head southward, using the blue key to exit. Remember to find any pickups in case you need them.