MAP32: Nullspace Junior is the thirty-second map of Congestion 1024. It was designed by Russell Pearson and uses the music track " ". It received a standalone release in March 2006 as "Null Space Junior". 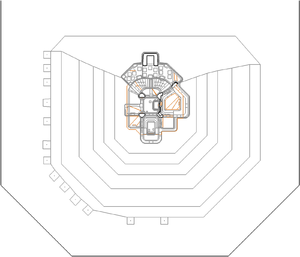 Map of Nullspace Junior
Letters in italics refer to marked spots on the map. Sector numbers in boldface are secrets which count toward the end-of-level tally.

At the start, flip the switch behind you to raise the floor. Turn around, go forward and go down the stairs to your right to find a switch. Press it then climb the stairs back up to find another switch straight ahead. Press it and go down the stairs again, this time use the switch in front to lower the lift. Ride it to the top and approach the items: as you do so the walls around you will lower. Turn right and go forward to collect the red key, doing this will trigger bars to lock you up in the upper floor. To be able to access the lower floor again you will have to fend off against the cacodemons that will swarm you for 30 seconds, then flip the switch on the pillar to the left of where the red key was. Now, either ride the lift down to the lower floor or take the stairs. Press the red switch twice and go to the upper floor again. You'll notice a switch on the other pillar so use it, strafe to the left and wait for the wall to lower, revealing the exit portal.

* The vertex count without the effect of node building is 2311.

As the name implies, the level is based on Pearson's Null Space, but as smaller-scale implementation of the concept.