MAP32: Poison Oak is the second secret level of Resurgence, accessed from MAP31: Festering Wicked Helix Sectors. It was designed by Darkwave0000 as a tribute to the "Poison Ivy" series of maps created by Josh Sealy (Joshy), the main author of Resurgence, and co-author with Darkwave0000 on Speed of Doom. The level's music track is "Vinefort" by James Paddock (Jimmy), taken from Back to Saturn X, which itself is a remix of "Great Hall," used on Poison Ivy II and Where the Poison Ivies Grow Wild. 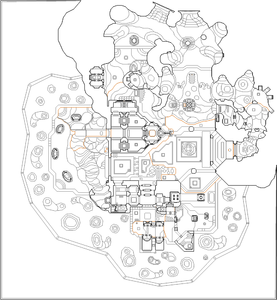 Map of Poison Oak
Letters in italics refer to marked spots on the map. Sector, thing, and linedef numbers in boldface are secrets which count toward the end-of-level tally.

* The vertex count without the effect of node building is 7584.