MAP32: Postcoitus Doom is the second secret map of Sunlust. It was designed by Daniel Jakobsson (dannebubinga), and uses the music track from TNT: Evilution MAP16/MAP26. 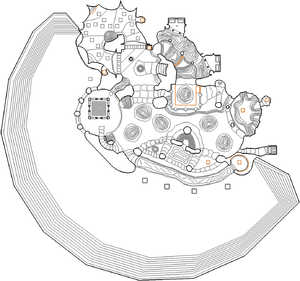 Map of Postcoitus Doom
Letters in italics refer to marked spots on the map. Sector, thing, and linedef numbers in boldface are secrets which count toward the end-of-level tally.

If you're playing from a pistol start, you will want to check out the normally-optional yellow key route.

You start in a small room. Shoot/hit the lion-head pillar in front of you to lower it, then walk forward and drop down. Ahead to the right, is a cliff with an obscene number of arch-viles on it. You can take cover behind a large column, but be wary of being shot from monsters on the far side of the walls. Proceed through and to the left (watch out for the mancubi) and up the stairs. There is a megasphere here -- oddly, taking it does not trigger any traps. Press the skull switch on the far side (northeast corner) to lower a column, and then ride it back up.

From the column top you can reach a short passage. A running leap will let you cross to a large round column, and then to the far side. Here a passage of dirty water leads down and to the southeast. At about the halfway point you'll trip a line that lowers the walls to northeast. Depending on skill level, that will reveal eight hell knights, a cyberdemon, or two cyberdemons. It will also raise a wall to block the way you came in, so you're stuck in there with them. There will also be a supercharge and a megasphere, and nooks with a boatload of energy cell packs at each end.

In the northern nook is a skull switch. (You may want to save here.) Press the switch, and the southern wall will open, connecting the passage to the cliffs with the arch-viles. Have fun with them. Through the opening and to the east is a small rectangular hole. Across that, up a short set of stairs to the left, is the exit switch.

Opposite the column that provides cover from the arch-viles is an opening. Through that you will fall down into a trench. To the right/west will be a backpack. A teleporter to the east will take you back out.

From the main lower area, go to the northwest, to find two openings into a cavern. Run across the tops of the square columns to make it to the very northwest corner, and take the yellow key there. Be warned that a mancubus or cyberdemon will be waiting on the platform opposite that corner. Making it to the key platform also triggers some crushers that will eventually kill the baddie. A quick dash to the key and then jumping down below the columns (and taking the teleporters up and out) may be a viable strategy here.

Having got the key, head back the way you came, to a gate at the south east corner of the main area. Open the gate to get a megasphere. Follow the walkway to get rockets and a rocket launcher, watching out for the monsters on the columns to your right. At the far end is a teleporter, which will bring you to an area at the northeast.

That northeast area has a BFG9000, cell packs, and a megasphere, but as soon as you step off the teleport landing platform, a horde of revenants will teleport in. After several seconds of delay, a wall at the northeast will open, revealing a teleporter back to the lower area.

* The vertex count without the effect of node building is 7139.