MAP32: Prestidigitation is the super secret level of Icarus: Alien Vanguard. The level takes place in a simulation of a mountainous area where various structures, including a lake, mysteriously appear as the level progresses. It was designed by Ty Halderman and uses the music track "Creepjaz" by Jeremy Doyle.

The word "prestidigitation" is a synonym for sleight of hand, and may be a reference to buildings and other things suddenly appearing in the outdoors portion of the level as if by magic. 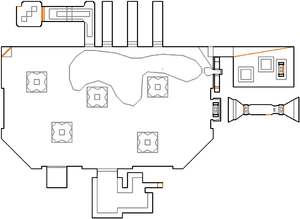 Map of Prestidigitation
Letters in italics refer to marked spots on the map. Sector, thing, and linedef numbers in boldface are secrets which count toward the end-of-level tally.

Grab the rocket launcher and the red key that are in the northeast of where you start. When you do, turn around to find several structures have formed. Cacodemons will spawn in from these structures. Go towards the waterfall on the east side and pick up the backpack. Turn right and you will find a target. Shoot it and you will open up several doors. The three to the north have several demons inside. The one to the south has barrels. Head down the passage that has barrels to a switch. After flipping it, head back to find another opening to the north, to the left of the demon pens. Head through the water, killing the shotgun guys and the arch-vile here, then press the switch. After pressing it, come back and the structures will be gone, while two more areas are opened. The one to the southwest has some arachnotrons inside. The other to the northeast holds the exit teleporter, but watch out for the mancubi that pop up. Open the barrier by pressing the panel furthest from the right to exit.

* The vertex count without the effect of node building is 591.