MAP32: Proceed With Caution is the second secret map of Claustrophobia 1024 2. It was designed by Steve Muller (Kyka) and uses the music track "". 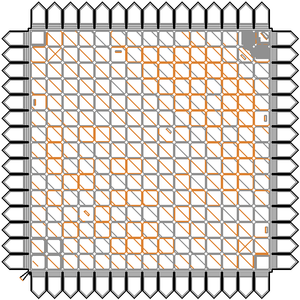 Map of Proceed With Caution
Letters in italics refer to marked spots on the map. Sector, thing, and linedef numbers in boldface are secrets which count toward the end-of-level tally.

Turn around and shoot the switch to reveal the entire 1024x1024 playable area.

This map consists of a single large room divided into 225 smaller squares. Stepping on most of these squares will cause monsters of various kinds to teleport into the room. These monsters will also be rapidly teleporting around the room in unpredictable patterns, making them extremely hard to hit. Additionally, closets containing chaingun guys and revenants (or former humans, sergeants, and imps on HMP and below) will be opening in the perimeter walls, and considering the virtually nonexistent cover here, their attacks can be very difficult to dodge. All in all, it makes the level stand up to its name - you have to proceed with caution. Running directly across the room will open up a lot of closets with enemies and cause numerous additional monsters to teleport in, resulting in potentially fatal consequences for you. You have to step on one square at a time, which will allow you to deal with enemies in small groups as they appear. Try to remember which squares you've already stepped on, and don't step on any other ones while dodging enemy attacks.

There are 7 switches you have to press to unblock the exit switch, which is located in the northeast corner of the room. By the time you press the final switch, you will probably have unleashed (and killed) most of the monsters on the map. Approach the exit switch to open up the last four closets.

Approaching any of the two megaspheres in the northwest and southeast corners of the room will cause six of the squares to rise up to the ceiling, providing some much needed cover.

If not all of the barriers blocking access to the exit switch have been lowered, it may be possible to get stuck between them, rendering the map unwinnable without using the noclip cheat.

* The vertex count without the effect of node building is 3911.