MAP32: Rocket for my Valentine (in Vanilla ports, abbreviated to "R.F.M.V." on the automap) is the second secret map of 1000 Line Community Project. It was designed by Kaito and uses the music track "Voyage" from MAP21: The Other Side of Jenesis.

The title of the map refers to Bullet for My Valentine, a Welsh heavy metal band, which is often shortened BFMV the similar way this level is on the automap. 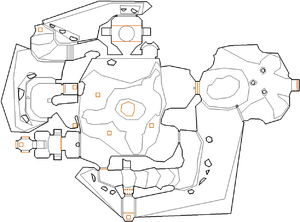 Map of Rocket for my Valentine
Letters in italics refer to marked spots on the map. Sector numbers in boldface are secrets which count toward the end-of-level tally.