MAP32: Scalpel Tart is the second secret map of 2048 Unleashed. It was designed by Xaser and uses the music track "Soilscraper" by Zan-zan-zawa-veia. 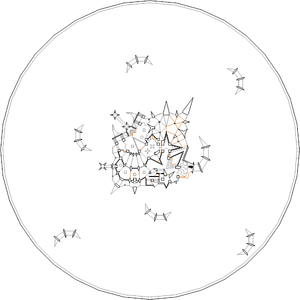 Map of Scalpel Tart
Letters in italics refer to marked spots on the map. Sector, thing, and linedef numbers in boldface are secrets which count toward the end-of-level tally.

Head forward and take the shotgun, kill an imp that appears in front of you then go up some steps to an area with zombiemen and shotgun guys - three revenants will also teleport in after a short delay. Turn right and right again to find a set of steps leading up to a yellow key door, then head west through a doorway and follow the path down until you reach a box of bullets. Next to the box is a narrow opening containing a chaingun - step through this opening and follow the tiled floor east (some chaingunners will teleport in to ambush you) until you reach a gray floor then continue heading east to find the yellow keycard sitting in a blood pool, which is guarded by an arch-vile to the north and a Hell knight to the south. Stepping into the blood will trigger a crusher trap - it is possible to get the key without being injured by stepping into the blood as the crusher rises.

Retrace your steps to the yellow key door and go through it, then follow the steps up past some chaingunners to another blood pool. Step through the blood to a set of steps and follow them up; just before you reach the top you will see a wide opening in the left-hand wall that you can drop through to find the blue keycard. As soon as you pick up the blue key, drop off the ledge on your right to land next to a blue key door and go through it to a narrow passage, then turn left at the junction ahead to reach an area with many moving platforms that have shotgun guys and imps on them. Make your way north until you see a wall with metal and silver hexagons - under this wall is a red skull key protected by two revenants.

Backtrack to the blood pool past the yellow key door and follow the staircase all the way to the top to find a red skull pillar. Press on the pillar to open it and reach a switch that will raise two cross-shaped platforms over the blood, then run north-west to jump over one of the platforms to a brightly-lit ledge - the walls will open as you land to reveal that you are near the start of the level, where two revenants and two arch-viles will teleport in. Return to the starting point and step through a section of fence that has opened (with exit signs on either side) to finish the level.

Several weapons can be found throughout the level:

South of the yellow key area is a narrow passage with a gargoyle switch, which will lower a lift to the east behind a low wall that holds lost souls and a pain elemental along with an armor and several medikits. You can get over the wall by climbing up some steps to the south leading to another armor (a baron of Hell will teleport in to defend it) then running north-east over the wall - after stepping over the wall press on its east side to lower it so you can get to the lift more easily. There is also a plasma gun in this area behind another low wall.

After passing through the blue key door, turn right at the junction ahead to reach a supercharge guarded by some chaingunners.

There is a BFG9000 on a silver platform in the east of the level which cannot be reached without cheating. This is done deliberately, as looking at this level in an editor shows an arrow pointing at the weapon with the word "NOPE" written above it.