MAP32: Self-Destruct is the seventeenth map of Hell To Pay. Despite the map slot, it is not a secret map: the previous map only has a "secret exit", making progression through MAP32 the only way possible. 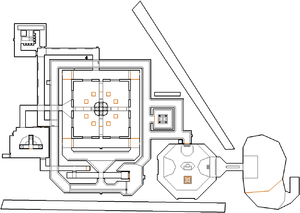 Map of Self-Destruct
Letters in italics refer to marked spots on the map. Sector, thing, and linedef numbers in boldface are secrets which count toward the end-of-level tally.

* The vertex count without the effect of node building is 1300.