MAP32: Sirenum Scopulli is the second secret map of Hadephobia. It was designed by Magicsofa and uses the music track " ". The par time defined in the DEHACKED lump is 7:30. 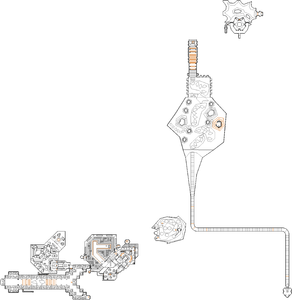 Map of Sirenum Scopulli
Letters in italics refer to marked spots on the map. Sector numbers in boldface are secrets which count toward the end-of-level tally.

Note: Each flush to a new location is a one-way ride, so make sure you collect all secrets in an area before you leave it by entering a teleporter.

* The vertex count without the effect of node building is 6247.