MAP32: Sodding Death is the super secret map of Community Chest 2. It was designed by Chris Hopkins (chopkinsca), and uses a MIDI rendition by Rie Lenka of the theme of Quagmire, the fifth level of the SNES game Equinox. It cannot be played under Boom, as it exceeds the 32,768 segs limit, which will cause the engine to crash as the result of a segment violation. 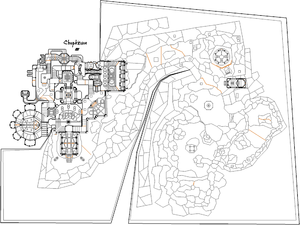 Map of Sodding Death
Letters in italics refer to marked spots on the map. Sector, thing, and linedef numbers in boldface are secrets which count toward the end-of-level tally.

Climb up the canyon as far as you can until you reach an area with a portico and a sign saying "EXIT". This is where the exit is, but you cannot reach it just yet. The portico to the east has three key switches to open the way to the exit, and in order to get those keys, you must head westward towards a vine-covered complex. Go all the way to the end of this building and flip the switch to lower the entrance, and then head inside.

The keys can be collected in any order. To get the blue skull key, head through the passageway and up the stairs and at the fork, go left and press the metal wall to raise it. Go through here and go right. Be careful as you may get ambushed when you pick up the key. The northern wall will prevent you from heading in that direction, but you can open it with a switch in the southeastern revenant alcove. If you are heading towards the red key next, go north and skip to where the gargoyle switch is.

If you are going for the yellow key next, go back south from where the blue key is and head down the stairs here. Go west towards a circular walkway and when you reach the rocket launcher, walls will lower revealing several mancubi, and the middle of the walkway will lower revealing some Hell knights, barons of Hell, and the yellow key (which has a lone arch-vile popping up when you approach it).

The red key is toughest to get. From where the yellow key was, go north, through the water-filled halls, up the staircase and around until you see a metal wall on the right hand side. If you want to take a different route, head from the entrance to the staircase with the fork and take the path that is slightly to the right (the other door to the right leads to the chamber housing the red key, but you cannot reach it yet). If you take this path, you should find the metal wall on the left. Whichever path you choose, open the metal wall and go until you find a gargoyle switch which you should press. This opens up walls back in the water-filled halls, so go back there (if you want an alternative route to the blue skull key, it is right next to the gargoyle switch, just press the metal wall there). You will find a small passageway at the north end of these halls leading to another switch. This switch opens another passageway in the area with the staircase and fork. Go back there, being wary of arch-viles and other monsters as you go, and head down the new passage which contains a lone arch-vile and a switch. This switch lowers the barriers preventing access from the red key. Grab it, but make sure you are prepared for a nasty ambush.

If you have not got all three keys yet, make sure to read a previous section of the walkthrough before leaving; otherwise, leave the complex and head back to the portico and exit area. There is either a spider mastermind or four arachnotrons along the way back, depending on your skill level. Inside the portico, press all three switches and the way to the exit will be revealed. You will have to wait a while to exit though, so make sure you grab the soul sphere and fend of cacodemons while you wait. Eventually, steps will rise so you can exit.

Three hanging bodies in the room where the yellow skull is found (things 34, 675, and 676,) and two of the hanging bodies near the staircase south of where you find the blue key (things 771 and 772,) are all solid, which prevents you from walking under them, even though it looks like there is enough space to do so.

* The vertex count without the effect of node building is 14922.