MAP32: Spider Bowl is the second secret level of The Abyss. It was designed by J.M.P van Waveren (MrElusive). This level consists of a large, labyrinthine cylinder, complete with spiral staircases and a spiderdemon/arachnotron arena in the middle. 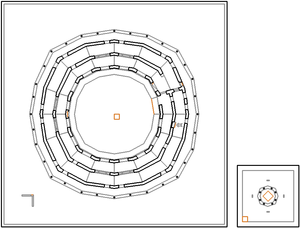 Map of Spider Bowl
Letters in italics refer to marked spots on the map. Sector numbers in boldface are secrets which count toward the end-of-level tally.

Make your way up the spiral, taking as little damage as possible. Hit the switch to lower the teleporter to the exit.

The rocket launcher is a must. Grab it near the player start and take out the mancubi. Depending on skill level, it may be necessary to take out the hitscanners first.

Once inside, revenants will be the primary threat. Thankfully, the stairs are narrow enough to cancel out most of their homing missiles. Make your way to the center, and prepare to fight a few arachnotrons, or a spiderdemon on higher skill levels.