MAP32: Super-Secret is the second secret map of STRAIN. It was designed by Holger Nathrath and Anthony Czerwonka (Adelusion), and uses the music track " ". 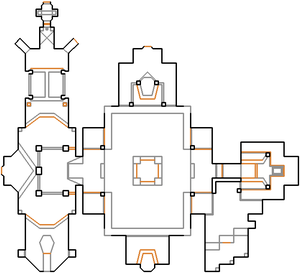 Map of Super-Secret
Letters in italics refer to marked spots on the map. Sector numbers in boldface are secrets which count toward the end-of-level tally.

The following multiplayer-only Things have no flags set for any of the three difficulty classes, so they do not actually appear in the level: a chaingun (thing 105), a super shotgun (106), a shotgun (107), a rocket launcher (108), and two radiation shielding suits (128 and 129).