MAP32: The Hard Way is the super secret level of the first episode of Back to Saturn X. It was designed by Paul DeBruyne (skillsaw), and uses the music track "Atomic" by James Paddock. The par time defined in MAPINFO is 2:30. In the official add-on version, this level's name is The Terror Of Maniac High.

Completing the level will take the player to MAP16: Get Out Of My Stations II. 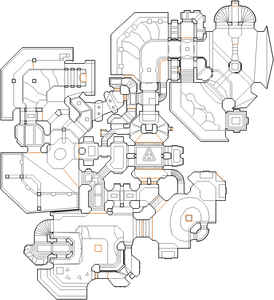 Map of The Hard Way
Letters in italics refer to marked spots on the map. Sector, thing, and linedef numbers in boldface are secrets which count toward the end-of-level tally.

To exit this level you will first need to collect either the blue or yellow keys, which will allow you to reach the red key that opens the exit.

To get the blue key, turn right as the level starts and head outside to face zombiemen, imps, chaingunners and a mancubus on a nearby ledge. Follow the ledge north into the next building and go straight forward until you pass between two switches, then flip the switch on the east wall to lower a lift next to it and ride this up to the next floor. Run north-east past some more imps and zombies to a structure with metal columns and take the blue keycard sitting by the east wall; taking it will reveal two pain elementals behind you.

To get the yellow key, head straight forward from the start, through a collection of weapons and large ammo pickups, to an outdoor area with imps, demons, zombies and one or two mancubi. Head west to a curved staircase and go to the top, then turn left and head straight forward to a switch; flipping it will open a door at ground level but will also release imps and a revenant behind you as well as cacodemons ahead. Go back down to ground level and follow the fence east and south to the door you just opened, which leads to a dark hallway, then follow this past spectres and a mancubus to another door. Go through and take the plasma gun in front of you before walking north-east to the yellow keycard - taking it will release several barons of Hell behind you as well as allowing imps to teleport in.

With either the blue or yellow keys, return to the start and head south-east through a hallway overlooked by imps to see two locked doors on your left. Open either door and head straight forward towards a mancubus, noting the imps and revenants that are released to your right, until you reach a UAC logo on the north wall then go west into a low tunnel (the steps here lead down to a supercharge). Follow the tunnel north past some imps until you see a locked door on your left, then head north-east to drop into a water trench and go round the next corner to confront a spiderdemon. Fight past this enemy to get to an open area with more imps then head up the steps on the north side to find a mancubus guarding a switch, which you can flip to raise a set of steps behind you. Go up the steps and slay two arch-viles that are released from the tower ahead, then run through the tower to leap over a brown wall and land on a lawn below with another mancubus, as well as Hell knights, imps, revenants and more mancubi waiting in a chamber to the east.

Head up the steps in the north-west corner to dispose of an arachnotron and revenant blocking your path, then run north over the revenant's platform to land in an enclosed area where you will be ambushed by zombiemen, cacodemons, a pain elemental and imps (or revenants on Hurt Me Plenty skill level or higher). Head west up some large steps, then run across another square platform at the top to leap over the water trench you walked through earlier, landing in a pit where imps, demons and knights will be released. Flip the switch behind the knights to open a nearby door and release three revenants, then go up the steps here to collect the red keycard. From here you should run south to drop down a ledge (an arch-vile will be waiting here if you have not alerted it previously), then look east to see the exit door.

From the start, head down the steps on your left then run west to find a megasphere on a small island.

A BFG9000 can be found in the south-east area of the level, guarded by mancubi, barons and knights (the staircases leading down to this area block sound, so you can stand behind the stairs and get some free rocket shots in). Taking the BFG will release one or two cyberdemons that you will have to get past to find a switch which opens two more chambers containing mancubi and arachnotrons; there is another switch in the arachnotrons' chamber that you must flip to escape.

* The vertex count without the effect of node building is 2713.