MAP32: The Hidden Slime Factory is the super secret map of Memento Mori and can be accessed from MAP31: Technology Base. It was designed by Mark Klem, who also composed the level's music track, "The Wind."

Due to the way MAP31 is designed, it is impossible to reach this level in single-player gameplay outside of using the level warp cheat, unless the player exploits a design flaw in the previous level. 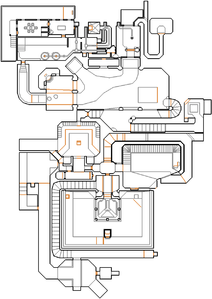 Map of The Hidden Slime Factory
Letters in italics refer to marked spots on the map. Sector, thing, and linedef numbers in boldface are secrets which count toward the end-of-level tally.

Grab the shotgun and head through two doors to a switch. Flip it to open the walls nearby. Go east and drop down, going towards the two switches and pressing them. Follow the staircase up, and an arrow points left to an alcove with another switch. Flipping it raises more of the ground to the hallway nearby. Take this hallway all the way around, but look out for the crusher just before the blue keycard. Grabbing the blue keycard opens the wall, and now you can access the blue door which is to your right. Flip the switch there, and you will be in a big room with a yellow keycard on the block. To get it, press the switch to trigger some stairs, then go all the way to the top. From there, jump south to get the key. When you do this, the stairs will be blocked off and some monsters will attack you. Enter the new area that they came out of and approach the east wall. A closet opens up behind you while a switch appears in front of you. Flip the switch to open the wall blocking the staircase, and head back up.

Open the yellow door and take the lit path all the way to a switch. Flip it, watching out for enemies behind you, then head back towards the other path, which takes you outside. Look out for the mass of zombies that suddenly appear, then head towards the blood river. Go down and grab the pickups on the ledge, and the wall behind you will open. Behind it, there will be a switch to the right. Flip it to head back outside and head into the new opening. Flip the switch inside here and head back down the blood river to find two new openings to the north with imps in them. Go through to the switch behind the megaarmor, and it will open the front gate so you can access it. Make sure to take it, and the rest of the river opens up. Open the door at the end of this passage, and climb the steps to the door. Open it to enter what appears to be a house. Go through the doors leading west killing enemies along the way and head downstairs to the yard outside. Go towards the armor bonuses and a switch will appear. Flip it and head back to the factory area before the "house", then go east. You will find two separate paths along with an open door with a radiation suit. Grab the suit and head down the right path, taking the lift up to a slime-filled room. Head through the small opening and follow it until you get the red keycard. Now go back, watching out for more monsters along the way, to the place where you got the radiation suit and take the other path. You will find a teleporter, enter it to appear on a ledge just outside of your starting point. Follow the ledge around and you will see the red exit door. However, it will be blocked off as you approach it, and you will also teleport back into the hall north of the starting point.

A new passage opens however, so take the stairs all the way down the marble path, through the nukage, and grabbing the stuff on the other side. You will actually get Secret #5, and a new tunnel will open in the nukage behind you. It is recommended to get Secret #6 for the radiation suit as well. Go down the nukage again through the next room and then through the next tunnel (the side room here has two radiation suits in case you run out). At the end of this tunnel is a room with a switch. Hit it, and you will remove the barricade in front of the red exit door. Now you will have to backtrack all the way until you get it so go back to the red exit door to leave the map.

Sector 323 is a teleporter that leads to the outdoor section south of the start, on the walkway from which the exit is accessed. It is supposed to be accessible after you climb the stairs to secret #7, and starts with its floor raised to its ceiling. However, linedef 2432 is set as type 40, which raises the teleporter's ceiling to the height of the highest adjacent ceiling, instead of a floor-lowering type of any kind. This means the teleporter cannot be used, and you must backtrack all the way over to the walkway to access the exit.