MAP32: The Pyramid of Death (Speed of Doom)

MAP32: The Pyramid of Death is the thirty-second map of Speed of Doom. It was designed by Josh Sealy and uses Egypt, an original track by Stuart Rynn. 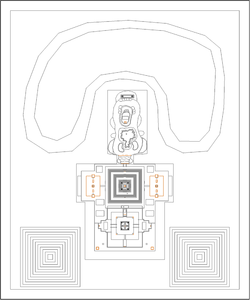 Map of The Pyramid of Death
Letters in italics refer to marked spots on the map. Sector, thing, and linedef numbers in boldface are secrets which count toward the end-of-level tally.

An "unofficial secret" is the trench area behind the red and yellow switches. It can be reached by jumping off the central pyramid onto either ledge near the starting area, and then making your way along the walls. The area contains an invulnerability, a megasphere, and a large number of energy cell packs.

* The vertex count without the effect of node building is 2474.