MAP32: The Super Secret Level is the second secret map of Doom 2 Reloaded. It was designed by Andy Stewart (eschdoom). The par time is 19:30. 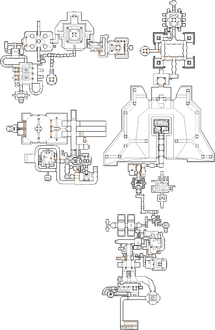 Map of The Super Secret Level
Letters in italics refer to marked spots on the map. Sector, thing, and linedef numbers in boldface are secrets which count toward the end-of-level tally.

There are multiple exits in this map, and the majority of this map is in the thirty-two secrets. While you can leave through any exit at any time, the screen at the start tells you how far can you go in the map, so you will need to do some secret hunting if you want to get through every part of this level. A number in every secret shows you just how far you have got. The combat in this map scales with each secret you find, and you will fight specific monster groupings with each successive secret. Making it all the way to the end will net you lots of supplies.

* The vertex count without the effect of node building is 7875.