MAP32: The Tomb of Akhenaten is the second secret map of 50 Monsters. It was designed by Brayden Hart (AD_79), Paul DeBruyne (skillsaw), Justin Kelly (Breezeep) and TheMionicDonut, and uses the music track "Vinefort," originally composed by James Paddock (Jimmy) for Back to Saturn X.

The level was originally designed for the twenty-second Abyssal Speedmapping Session. Due to many submissions to the session being unfinished on time and the long delay in an eventual release, Hart decided to reuse the level for 50 Monsters. When the WAD from the Abyssal Speedmapping Session was finally completed and released in February 2018, The Tomb of Akhenaten was included as MAP16. 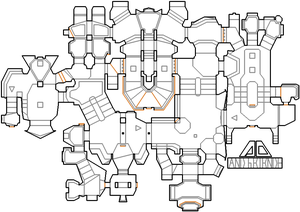 Map of The Tomb of Akhenaten
Letters in italics refer to marked spots on the map. Sector, thing, and linedef numbers in boldface are secrets which count toward the end-of-level tally.

A revenant (thing 267) and a Hell knight (thing 172) are inside teleporter closets, however since both of them are flagged as deaf, they do not actually enter the map by normal means.

* The vertex count without the effect of node building is 1742.